Oris announces a new limited edition diver’s watch and its first in solid gold, produced in support of Coral Restoration Foundation as it reaches a significant milestone 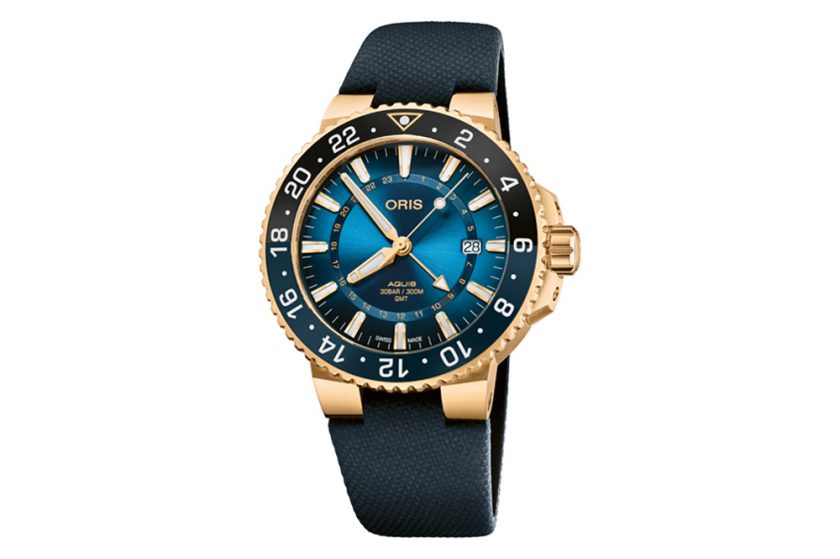 Oris is delighted to announce the Carysfort Reef Limited Edition, the second limited edition diver’s watch made in partnership with Coral Restoration Foundation, the world’s leading coral restoration organisation. By the end of this year, the foundation will have outplanted over 30,000 corals on Florida’s Carysfort Reef, a golden moment Oris is proud to join it in celebrating.

Oris is committed to raising significant funds for Coral Restoration Foundation. The independent Swiss watch company will donate three 18-carat yellow gold watches from the run of 50 limited edition pieces to the non-profit organisation, which will auction numbers 02/50, 03/50 and 04/50 at a series of events this spring. The purpose of this special gold edition is to raise as much as possible in support of the foundation’s pioneering activities.

Oris has been working with Coral Restoration Foundation since 2014 as part of its mission to bring Change for the Better. That year, the organisation’s founder, Ken Nedimyer, was recognised as Oris’s Sea Hero of the Year and given a grant to help further the foundation’s work. The first watch collaboration followed in 2017 and proved to be a huge success in raising funds and awareness for the foundation. Oris is thrilled to be able to step up its support again for the organisation’s vital work.

The Oris Carysfort Reef Limited Edition is the first Oris Aquis model produced in solid gold. The case is cast in 18-carat yellow gold, complemented by a solid 18-carat gold bezel with a black and blue ceramic insert. The automatic mechanical watch has a GMT function and can show the time in three time zones simultaneously using the 24-hour scale laser-engraved into the bezel.

Coral Restoration Foundation is based in Florida and has become the world’s leading expert on coral restoration. Its reef restoration methods, which reintroduce coral to damaged reefs, have been adopted by a growing number of enterprises around the world, including the Reef Restoration Foundation, which Oris partnered with last year for the Great Barrier Reef Limited Edition III.

The foundation has been working to restore Carysfort Reef since 2014 and has already made significant strides towards securing its future. This year, its restoration programme is accelerating. So far, the foundation has returned nearly 25,000 corals to the reef, a figure that will rise to at least 30,000 by the end of 2020. It’s a remarkable achievement, and the result of incredible vision, energy and commitment.

The scale of the problem – and why it matters

Carysfort is one of the world’s most iconic coral reefs. ‘The reefs of the Florida Keys, including Carysfort Reef, were the epicentre of the early recreational dive industry in the 1950s and 1960s,’ says Martha Roesler, Coral Restoration Foundation’s Chief Development Officer.

But over the last 40 to 50 years, the reef has been severely degraded. Coral populations in the Keys have declined by around 98 per cent. ‘There’s now a critical need for coral restoration on a massive scale to restore Carysfort to a healthy, thriving reef system,’ Martha explains.

Why does this matter? Coral reefs are among the Earth’s oldest and most biodiverse ecosystems. While they cover just 1 per cent of the Earth’s surface, they support at least 25 per cent of all marine species.

The health of the oceans is vital to all life: they produce 70 per cent of the world’s oxygen. ‘Coral reefs are a critical part of a healthy ocean and provide essential ecosystem services,’ says Martha. ‘They’re important for human subsistence, supporting fisheries that provide protein for billions of people. They also form natural barriers that protect shorelines and infrastructure from wave energy and storm surges.’ It’s estimated that coral reefs have a global value of close to $10 trillion.

The real threat of climate change

The threat to coral reefs has been mounting over the last 40 years and has now reached critical status. The foundation is clear on the main cause. ‘Climate change is the biggest threat to coral reefs around the world,’ says Martha. ‘It’s impacting our oceans through the increase of sea surface temperatures, increasing ocean acidification, sea-level rise, changes in storm patterns, changes in precipitation, and altered ocean currents. Coral reefs are now experiencing higher ocean temperatures and acidity than at any time in the last 400,000 years. But the reefs in the Keys have also experienced decades of local stressors – things which we can control.’

Because of these negative changes, many reef-building stony corals, such as staghorn and elkhorn corals, are now endangered species. ‘As individual coral colonies die, the reef ecosystem degrades,’ Martha says. ‘If too many stony coral colonies die, then the reef itself reaches a tipping point, leading to its complete deterioration and death. ‘Coral reefs are now the most endangered ecosystems on the planet,’ she continues. ‘Humanity has never before faced the extinction of an entire ecosystem, yet we have lost 50 per cent of the world’s coral reefs in the last 30 years. In the next 80 years, without direct action, all shallow coral reefs could become extinct.’

All is not lost, though. ‘There is every need to continue to work to restore damaged coral reef ecosystems,’ says Martha. ‘Despite the ongoing threat to coral reefs from climate change, there is still hope. By mitigating local impacts, and ensuring coral populations persist in the wild, we have a chance of turning the tide and helping corals to adapt and survive into the future.’

The foundation has developed coral restoration techniques that allow them to restore reefs on a massive scale. Corals can propagate from cuttings (asexual reproduction) and over the last decade, the foundation has experimented with growing coral fragments. Its Coral Trees (pictured previous page and above) are now widely accepted as one of the most effective methods for growing corals in the ocean.

‘If coral populations in specific areas are restored to historical levels, we can jump-start the reefs’ natural recovery processes,’ says Martha. ‘And by restoring strategically important reefs with the most critical species, we create a series of ecological stepping stones, like parks, that act as seeds and begin to knit the entire system back together.’

The Oris Carysfort Reef Limited Edition has the potential to make a huge difference to the Foundation’s work. Auctions of the three pieces donated by Oris to the foundation will be held in February, March and April at a series of events in the USA, the last of which is the foundation’s own Raise the Reef gala. Funds raised by sales of the remaining limited edition pieces will also help support its work.

Those funds will go directly to supporting the foundation’s ongoing project to restore Carysfort Reef. Over the next three years, the foundation is planning to restore an area of the reef measuring almost 100,000m2 throughout the Florida Reef Tract, roughly the size of 17 American football fields. By the end of 2020, it will already have returned at least 30,000 corals to Carysfort Reef alone.

The foundation’s vision is that Carysfort will be the world’s first reef to experience successful, ecosystem-level recovery. And, thanks to support from partners such as Oris, it’s extremely confident this can be achieved.

Later this year, Oris will introduce a steel version of the Carysfort Reef Limited Edition, also in support of the foundation’s work. ‘The collaboration with Oris allows us to raise critical funding, as well as to increase awareness for our organisation and our mission by helping us reach an international audience,’ says Martha.

‘This partnership is central to our continuing mission to bring Change for the Better,’ says Oris Co- CEO Rolf Studer. ‘Through the Oris Carysfort Reef Limited Edition, we’re really stepping up our ambitions and our contribution to returning the world’s corals to their original state. It’s a hugely important project and we’re excited by everything Coral Restoration Foundation is achieving through it.’

The Oris Carysfort Reef Limited Edition is based on Oris’s high-performance Aquis diver’s watch and features the same standard specifications, including water resistance to 300 metres. But it is the first Oris diver’s watch produced in solid 18-carat yellow gold – the case, bezel, crown and crown protectors are all made of the precious material. Its hands are yellow-gold-plated and filled with luminescent Super-LumiNova®, including the ‘lollipop’ central seconds hand.

The automatic mechanical watch has a GMT, or second time zone function, indicated by a central hand that makes a full tour of the dial once every 24 hours. A second time zone can be read off against a 24-hour chapter ring on the dial, while a laser-engraved 24-hour scale on the bi-directional rotating bezel can be used to indicate a third time zone. The bezel insert is made of scratch- and fade-resistant black and blue ceramic, designed to indicate day and night time for an additional time zone.

The watch has a sapphire crystal over a gradient blue dial that darkens towards the edge, and a date window at 3 o’clock. The solid gold case back has a sapphire crystal inlay decorated with the limited edition number and a special motif celebrating Coral Restoration Foundation’s milestone of 30,000 corals planted. It’s set on a blue leather strap with a rubber coating, and each of the 50 pieces made will be presented in a special wooden box.

Top glass Sapphire, domed on both sides, antireflective coating inside

%d bloggers like this:
We use cookies to ensure that we give you the best experience on our website. If you continue to use this site we will assume that you are happy with it.OkNo