Turkish Airlines has launched a new commercial which explores the humanity’s spirit of exploration, inspired by the world-changing Moon landing in 1969. “Step on Earth” brings back the sense of wonder and adventure felt as 600 million people around the world watched the humanity land on the Moon. The 30-second commercial was viewed in the third quarter of the Super Bowl LIV held this year in Miami, and resulted in the victory of Kansas City Chiefs by the score of 31-20, defeating San Francisco 49ers.

Flying to more countries than any other airline, Turkish Airlines challenges the statistic that over a billion people globally have never travelled outside of their country. The Star Alliance member airline gave the opportunity to three people, who had never travelled abroad, to discover the world beyond the borders of their home country for the first time. The new commercial features Russ, Mariha and Karlos exploring countries they had never visited and discovering for themselves the adventure of stepping foot in a new country. The commercial captures the power and emotion of the journeys to novel landscapes and horizons around the globe and encourages us to explore our own planet. The adventure starts with one small step on Earth.

In the commercial itself, the viewer is shown archive footage from a 1969 newspaper heading and preparations leading up to the Apollo 11 countdown and take off. Meanwhile in 2019, Russ, Mariha and Karlos prepare for the flight, approaching a Turkish Airlines plane waiting for them on the apron. Each first time traveller is destined for a different landscape for an unforgettable experience: exploring deep caves and waterfalls amongst lush tropical forest, trekking through deep snow and riding a group of wild horses in the desert. 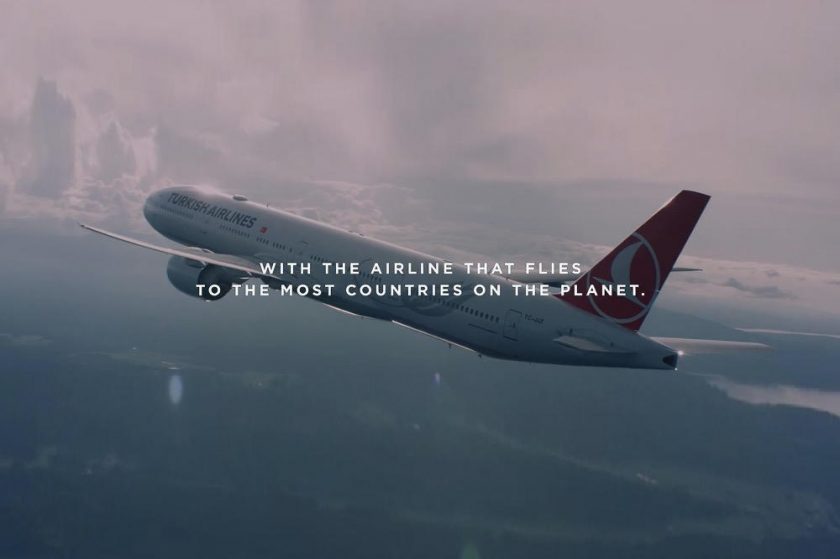 Turkish Airlines Chairman of the Board and the Executive Committee, M. İlker Aycı, commented; “This film celebrates the spirit of discovery and adventure that permeates all of us, from first time travelers to lifelong adventurers. We look up at the sky for every new adventure as our planet has countless wonders and moments waiting to be discovered. As Turkish Airlines, the airline that flies to more countries than any other, we are delighted to keep you encouraged to ‘Widen Your World’ to discover the rich variety of cultures and landscapes here on Earth.”

This is the brand’s fifth consecutive big game ad featured at the Super Bowl, one of the most watched sports tournaments around the world, alongside a line up of some of the world’s most recognisable brands. ‘Step on Earth’ will be aired in 20 countries around the world and follows on from a number of high profile commercials that Turkish Airlines have aired at the Super Bowl till now. In 2016 Turkish Airlines debuted the “Batman v Superman” campaign, the 2017 “Widen Your World” where Morgan Freeman invited us to explore the wide route network, and the “Five Senses” campaign in 2018 starring Dr. Oz, who experienced the wonders of the world through five senses. Ridley Scott directed the 2019 Super Bowl commercial ‘The Journey’, a cinematic and thrilling chase through the stunning sights of Istanbul and the new Istanbul Airport.

Flying to more countries than any other airline, Turkish Airlines currently connects 318 destinations in 126 countries, with exciting new destinations to be introduced in 2020.

%d bloggers like this:
We use cookies to ensure that we give you the best experience on our website. If you continue to use this site we will assume that you are happy with it.OkNo