Fabergé’s crescent moon set honours a symbol of love and pays tribute to the faithful heart of a mysterious secret agent.

In celebration of Eid al-Fitr, Fabergé is delighted to present the true story of romance, intrigue, adventure and beauty – the Crescent Collection, which includes an 18k yellow gold pendant, ring and earrings.

These hand-crafted pieces are inspired by an enchanting story that takes us back in time. In the early 1960s, a mysterious former French secret service officer, Charles Antoine Roger Luzarched’Azay, gave his collection of 18 exquisite Fabergé cigarette cases to the Musée des Arts Décoratifs in Paris. Years later, friends of M. Luzarched’Azay explained that Charles had been desperately in love with the glamorous French aristocrat Princess Cécile Murat – who was already married. 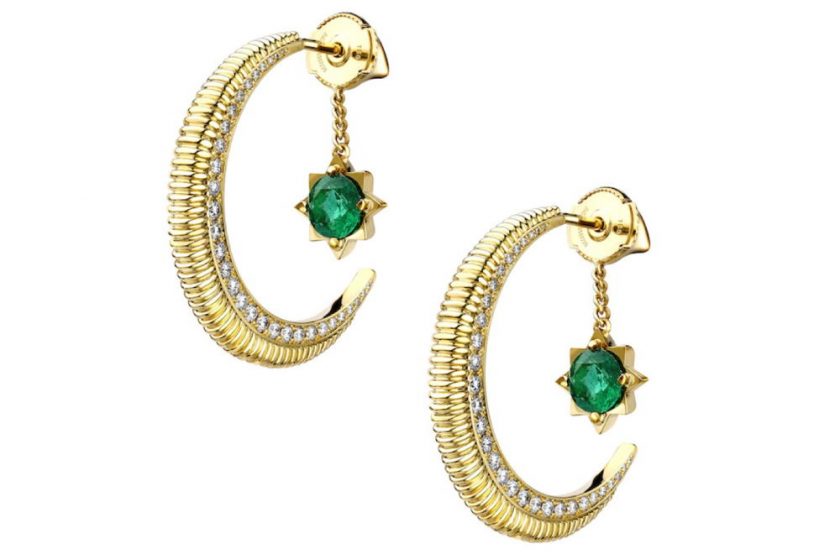 Fabergé was inspired by his devotion and by the enigmatic symbols that decorate the cases, including crescent moons and a golden map of the Nile with coloured gems marking cities along its course.

Curators are still unsure as to the symbol’s meanings. Does the crescent moon symbolise midnight trysts or covert adventures? Fabergé prefers to leave those questions unanswered and to celebrate the crescent moon as a symbol of beauty and devotion, while the emerald has long been associated with eternity, the heart and the renewal of love.

The Crescent Collection is notable for its delicate patterns and superb workmanship, with elegantly detailed, fluted 18k yellow gold crescent moons, picked out by a line of diamond pave with a sparkling emerald star nestling in the new moon’s curving arms.