Dubai, UAE, 04 August 2020: As part of Dubai Summer Surprises (DSS), the summer celebration of shopping and family fun, Arabian Automobiles, the flagship company of the AW Rostamani Group and the exclusive dealer for INFINITI in Dubai, Sharjah, and the Northern Emirates, is delighted to be giving away six INFINITI Q50 cars.

Two winners were announced on 18 July and 25 July, with four more cars still up for grabs on 8 August , 15 August, 22 August, and 29 August. To take part, all customers have to do is spend AED200 at participating malls, including BurJuman, Dubai Outlet Mall and Oasis Mall.

Powerful elegance is at the heart of INFINITI design. Bold and aggressive, yet meticulously refined, the Q50 is where unstoppable performance meets advanced human artistry; when you step inside, you’ll feel empowered to own your drive. With a low, wide and dynamic stance, an athletic front bumper and refined chrome accents with subtle textural qualities, the Q50 lets you express yourself as only you can.

DSS is a wonderful experience for residents and visitors alike, and INFINITI of Arabian Automobiles is proud to once again be a strategic partner to help cement Dubai’s status as one of the best cities to live, work and visit. 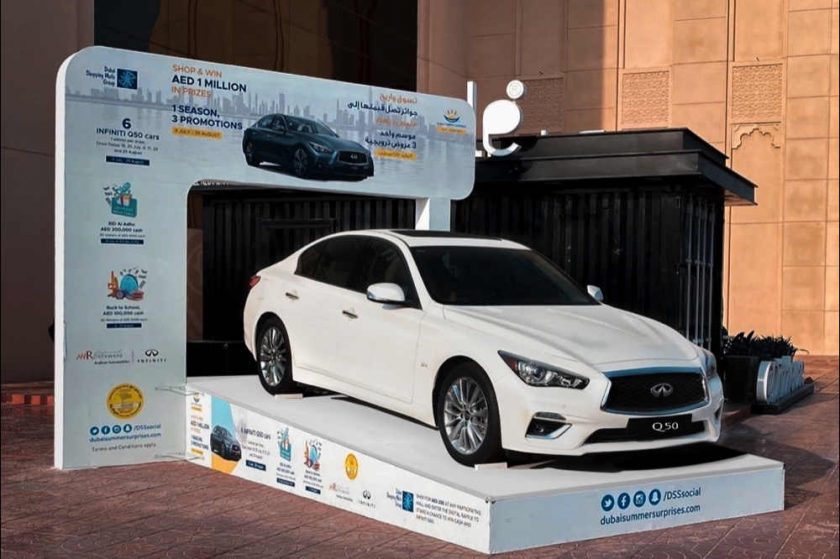