by Maria Camilleri Calleja, Ambassador of Malta to the UAE

Malta has been present in the UAE for almost two decades, but 2020 is an important year for our relations, not simply because we are talking, interacting and meeting more than ever, but because, in spite of and amid pandemic crisis that has hit the world, together, as two countries with so much in common, we took up the COVID-19 challenge and turned it into an opportunity.  So much is the will to strengthen relations that Malta also accredited its first resident Ambassador in the UAE, with residence in Abu Dhabi; and the UAE welcomed this initiative with open arms.

And so here I am writing to you about my country and hoping that this article will entice you to dig deeper into what Malta is, what it offers at various levels, and why we are present in the UAE.

Malta and the UAE may be separated by a few hours of flying, but they could not be more similar.   Both run by ambitious governments with the vision and perseverance to make of their countries the best in their respective regions and in the world, both believe that tolerant and respectful multicultural societies, where all those who wish to contribute can do so and thrive of their gains, are ultimately entitled to reap an important dividend: a happy and satisfactory life.

Following the establishment of diplomatic relations, Malta and the UAE went on to sign a number of agreements namely the Avoidance of Double Taxation Agreement in 2006, the Air Services Agreement in 1994 (amended in 2006 and again in 2007), and more recently, a Memorandum of Understanding on Political Consultations signed in 2014 and a Memorandum of Understanding on Cooperation in Public Administration signed in 2016. 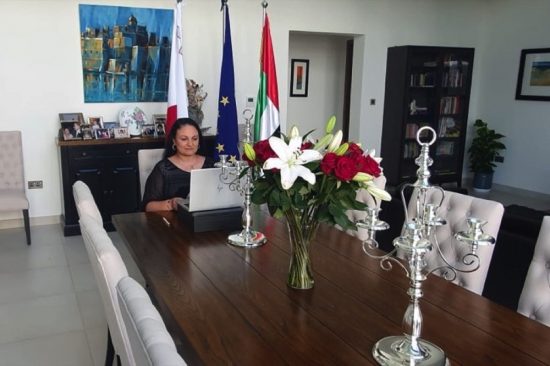 Spurred by this robust legal architecture, both countries through diplomatic and political channels are already set on expanding their cooperation in the health sector; water services; innovation; education and training; home affairs; connectivity; youth cooperation, cultural and academic cooperation.

Notwithstanding these benchmarks, both countries, as members of a number of regional and international fora and organisations, have the opportunity to amplify avenues of cooperation on an inter-regional and global level.

In 2007, Malta was the EU country which conceived of the Euro-Arab Dialogue, launching the first Ministerial Meeting between the European Union and the League of Arab States in 2008 in Malta.  As a European country which has traditionally enjoyed strong links with the Arab world, Malta is uniquely placed to work with our partners in the United Arab Emirates and in the Gulf.  In 1972, then Prime Minister Dom Mintoff had visited the United Arab Emirates and held talks with His Highness Sheikh Zayed Al Nahyan.  Both countries have come a long way since that day, both locally, bilaterally and on the global level.

At the United Nations, the UAE is bidding for a non-permanent seat in the UN Security Council for the period 2022-2023, while Malta is seeking a non-permanent seat in the same council for the period 2023-24.  What does this mean?  If both are elected in their respective bidding years, Malta and the UAE – for at least a period of one year – will have the opportunity to work together on a good number of issues which cut across their common will to forge world peace, create sustainable societies, forge respect for human dignity and tolerance, as well as ending poverty and leaving no-one behind: all elements which run common in our foreign policy DNA.

Tying to the international perspective, Malta has recently accredited its first Permanent Representative to IRENA – the International Renewable Energy Agency – located in Abu Dhabi.  When on 29-30 June 2009, in Sharm el-Sheikh, member states had to choose a location for the IRENA Headquarters, unhesitatingly, Malta supported the UAE’s bid to host the Headquarters which is now a landmark in Masdar City, Abu Dhabi.  The future is exciting!  Both Malta and IRENA have already rolled up their sleeves and identified areas of collaboration where expertise can be shared in the renewable energy sector.  Likewise, Malta did not hesitate in 2015 to support the UAE in its bid to host the EXPO.  We are excited to work with our Emirati friends towards the opening of EXPO in October 2021 and to attract as much participation as possible to this global event which is set to wow its audience yet again.

Malta Day cannot go by without a well-deserved mentioned of the expeditious and hard-working Maltese diaspora in the UAE, which has long-represented Malta impeccably in this country, and continues to do so, through its hard work and contribution to the continuous development of the United Arab Emirates, etching an excellent name for Malta and what it stands for.

Now that is a good question: what does Malta stand for?

If size ever mattered, the dimensions of my country are – more than anything – an advantage.  You can travel from cliffs to city to beach to home in a few minutes.  No matter how busy the street is, if you need help, everyone comes to your rescue.

Malta stands for accessibility, flexibility and integrity.  As per its historical content, Malta has – over centuries – mastered the ability to transform itself and adapt to changing situations, to new empires, new rulers, new circumstances, until finally it took in 1964, its own reins it hand and started governing itself as a sovereign state.

Malta also chose Neutrality when on 15th May 1981, barely two years after Malta ceased to be a military naval base, Malta declared itself neutral.  In 2021, Malta celebrates 40 years of Constitutional Neutrality.

What is the value of this?  In a region which has long been embroiled in centuries old conflicts, Neutral Malta is governed by no-one, is a military base to no-one, is used by no-one but speaks to everyone and innately harbours the obligation to bring warring parties back to the negotiating table.  As the subject of many a debate, not least in Malta itself, Constitutional Neutrality has spurred Malta’s foreign policy and more importantly its Mediterranean Vocation to nurture peace, security and stability in the Mediterranean Region.  This notion now extends to the beyond-the-region: those we call Neighbours of Neighbours: the Gulf States and Sub-Saharan Africa, where Malta is working hard to leave its mark.

It has indeed been a unique year.  2020 will go down in the history books as the year of many façades.  We have seen the wrath of death and destruction, a total upheaval of the global economy, a ravage of the aviation industry and life-altering circumstances from family separations to job losses, from the collapse of tourism destinations to food and water security concerns, and most importantly, the vulnerability of healthcare systems around the world.  However, on an even more positive note, it has thought each and every one of us the importance of humanity, as well as resilience, and thinking outside the box.

And that is exactly what the Embassy of Malta in the UAE has been doing: thinking beyond the ordinary.

Who wants normal, when you can have New Normal?

Who wants normal, when you can have SOMETHING NEW?!