Kuwait City, Kuwait, (AETOSWire): Located in the heart of Kuwait City, the new pearl and shell-shape inspired head office for the National Bank of Kuwait (NBK) consists of 63 floors and stands at a height of 300 meters, making it the country’s second tallest building and a remarkable new landmark in the city’s skyline. The 10 TWIN elevator systems installed at this office tower are the first to be supplied by thyssenkrupp Elevator in Kuwait. TWIN is the only elevator system with two cabins that move independently in one single shaft, making the most efficient use of available space, using less energy, and quickening the pace of building tenants. The five-year contract includes maintenance support with access to a stand-by technician. 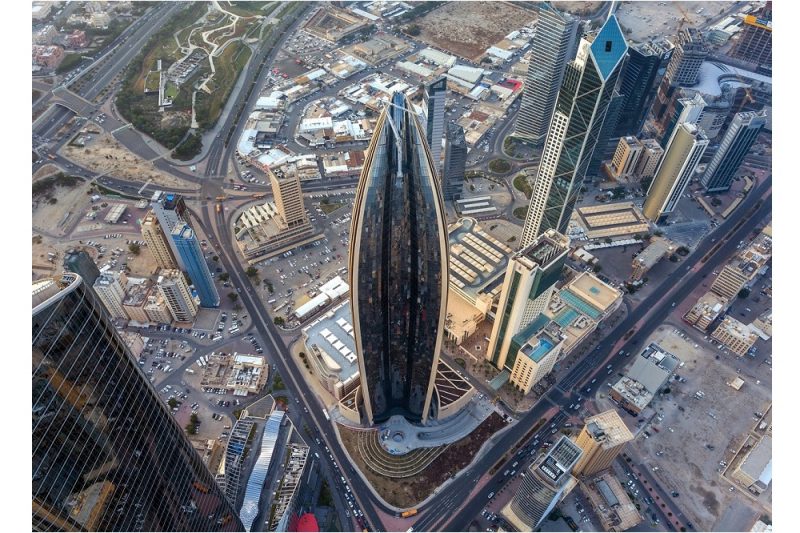 “Kuwait City is a beacon of architectural modernity – as are the new headquarters of the National Bank of Kuwait. To match this overall ambition in terms of indoor mobility, we deliver some of the world’s most advanced systems. I’m glad to announce thyssenkrupp Elevator’s first TWIN installation in Kuwait, which also includes our digital solution AGILE, a smart mobility system”, said Peter Walker, CEO at thyssenkrupp Elevator.

Each elevator has its own traction drive, controller, ropes, counterweight, and governor, while also sharing the same guide rails and landing doors. The key to this system’s safety is that the cabins always operate at a minimum safety distance. It is fully certified by the German TÜV inspectorate – the most stringent and rigorous safety standard an elevator can attain.

The project was built in line with LEED Gold requirements, one of the first with such high certification in Kuwait. Apart from the 10 TWIN elevator systems, thyssenkrupp Elevator has also installed 12 conventional elevators, some of which can travel up to 6 meters per second, as well as 1 panoramic elevator and 2 escalators.

Mobility throughout the entire building is promoted via thyssenkrupp Elevator’s destination selection control (DSC) software, AGILE. Unlike conventional operation, a floor is chosen at the AGILE terminals in front of an elevator group and the intelligent dispatching software analyzes the request – gauging traffic demand and grouping passengers based on similarity of destination. This leads to less crowding, fewer stops, and a more efficient use of available elevator capacity.

thyssenkrupp Elevator is firmly established and integrated in the Middle East region since many years, having supplied and installed its unique and innovative TWIN elevator systems at several buildings across the region, such as Latifa Tower in Dubai, Public Investment Fund (PIF) Tower in Riyadh, 10th Kings Road Tower in Jeddah, State Audit Bureau Towers and Al Sultan Tower in Doha.