With her new High Jewelry collection, Claire Choisne, Creative Director of Maison Boucheron, aimed to seize the intangible by revealing the fleeting beauty of the natural world. “For years, I have wanted to capture the ephemeral, to convey the poetry of present moments, the purity of the sky, light effects. The jeweler’s art is about stopping time in its tracks, making instants eternal when, by their very essence, they are not”.

Comprising sixty-seven pieces, Contemplation represents the most personal and intimate collection of High Jewelry ever created by Claire Choisne. The codes of Boucheron are interpreted with an extremely sensorial approach: pieces seem to quiver with the slightest breath on the skin, fragments of stars are caught in airy matter, a cloud of diamonds swirls on a weightless necklace. The first jeweler to open on Place Vendôme now invites us to reconnect with our senses in order to appreciate what is most precious: the present moment. 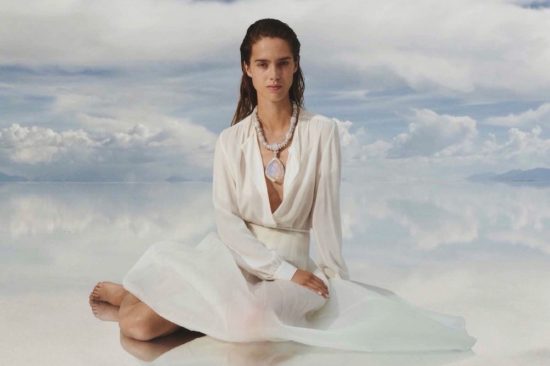 “With this necklace, I wanted to capture what cannot be caught – a piece of sky to wear around your neck”. Given such an aim, the creation of the Goutte de Ciel necklace was inevitably extremely complex. For two years, Boucheron sought a material that could reproduce not only the sky’s infinite palette of blues, but also its fleeting, near-impalpable essence. And then, the jeweler came across a special substance used in space by NASA to gather stardust. This mystery matter – 99.8% composed of air and silica – varying in color according to the light is enclosed in a shell of rock crystal set with diamonds. This extraordinary talisman hung from a choker also fashioned in rock crystal and paved with diamonds. True to a tradition of transformability, a sautoir version is offered on a silk cord. It is complemented by a cabochon bracelet, whose extremely pure lines also integrate a piece of this 21st century sky.

A cloud flits across the sky, its shape gracefully extending as it goes. Far from a figurative representation, Boucheron’s cloud formations are graphic and contemporary in style – witness a pair of asymmetrical earrings which surround the lobe, front and back, with a halo of diamonds. On the ring, these clouds seem to float above the fingers, scattering a diamond shower. The necklace, meanwhile, plays on contrasting materials, with a cascade of frosted rock crystal beads on which rest two clouds, their elegantly elongated forms evoked by diamonds that gradually decrease in size.

The gaze roams beyond a window reflecting the colors of the sky. A necklace of diamond-set gold beads is hung with an emerald-cut rock crystal reminding the outline of Place Vendôme. The inside of the crystal is crossed by clouds in a 3D illusion created by a laser-engraving technique unprecedented in High Jewelry. At the center of this crystalline space, sits an emerald-cut diamond. This dazzling piece is further enhanced by an Art Deco-style tassel paved with baguettes. It is complemented by a spectacular asymmetrical bracelet, half in rock crystal, half in diamonds, while three monochrome rings complete the set, entitled Miroirs Infinis. Some display a pear-cut or emerald-cut diamond of exceptional purity, weighing more than five carats, on a white jade body. 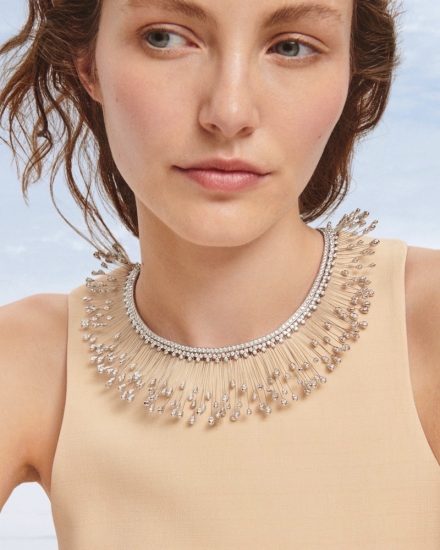 A homage to James Turrell’s “Open Sky” artwork in Naoshima, this window on the sky is a necklace crafted from titanium mesh, as fluid as fabric, which forms a perfect rectangle when it is worn. On its surface, Claire Choisne has drawn a stormy sky in mother-of-pearl with diamond clouds set off by slate-colored lacquer applied with an airbrush. This celestial vision is further illuminated by a 35-carat sugarloaf tanzanite with a deep ultramarine hue. In the same spirit, a rectangular ring has a plateau of white lacquer adorned with an 8.52-carat tanzanite, surrounded by a diamond-paved setting.

Inspired by the observation of a raindrop gradually getting longer until it disappears, these pendant earrings are fashioned from two aquamarines, each of nearly 70 carats. Displaying an exceptionally rare, ultra-fine pear-cut, they are suspended from diamond-paved white gold. The Bleu Infini ring, meanwhile, is adorned with a nearly 32-carat, cabochon-cut aquamarine spanning two phalanges and supported by a diamond-set mount.

With Goutte de Silence, Maison Boucheron reinvents its iconic Serpent Bohème in the form of a necklace in white gold, mother-of-pearl and diamonds, which can be worn in three different ways: as a sautoir, a double-strand necklace or a short necklace. Boucheron’s tradition of versatility is taken to new heights with the graceful pair of earrings, which offers six separate looks, and may be accompanied by a ring.

Revisiting the design of Boucheron’s first fragrance, these two pieces present variations on the cabochon form. The sleek lines of the Ciel de Jour bracelet and ring are sculpted in rock crystal which, when viewed from the front, reveals a layer of sparkling diamonds. In profile, the diamonds disappear as if by magic.

The Murmure d’Étoiles bracelet spotlights an exceptional tanzanite of more than 150 carats evoking a star-spangled summer sky, and resting on an aventurine glass. It is complemented by a ring set with a 52-carat tanzanite and pendant earrings fashioned from teardrop-shaped tanzanites, each of nearly 40 carats.

Blow on a dandelion clock and watch as its downy seeds drift away on the breeze. To convey this flower’s infinite lightness, Maison Boucheron perfected a new type of trembler using titanium threads no thicker than a hair, whose spring effect creates natural movement.

Interpreted figuratively, the dandelion winds gracefully around the throat and wrist, its diamond seeds quivering with the slightest gesture. The asymmetrical earrings separate into the dandelion clock scattering its seeds and the leaf adorning the earlobe. The ring, meanwhile, with its spectacular volume, can be worn with or without its diamond-set leaf.

In a more abstract vein, the dandelion lends itself to the extravagance of a diamond choker, where each and every titanium thread is crowned with a dazzling diamond droplet. Likewise a tiara in gold and diamonds, which represents an aesthetic and technical achievement of exquisite delicacy.

Grasses rippling in the wind… For the graceful ensemble of Au Gré du Vent, Boucheron drew inspiration from its archives. The Question Mark necklace, created by Frédéric Boucheron in 1879, is here strewn with Akoya pearls and dancing diamonds. The earrings, meanwhile, form an airy cluster of pearls and diamonds.

The brooch and the short necklace evoke a large leaf whose impression of delicacy and lightness is produced by the use of small pearls and round diamonds, mounted on knife-edge threads.

On the ring and earrings, the mounts disappear behind a cluster of pearls and diamonds that seem to have been scattered by the wind.

The softness of a feather fluttering in the light is conveyed by mother-of-pearl, which is finely shaped and chiseled to evoke downy curves, as on this choker composed of a circle of iridescent feathers whose vanes are defined by diamonds.

It is presented with a bracelet, while a ring, likewise in mother-of-pearl, creates the impression of a feather simply settled on the hand, so discreet is its mount. Immaculate, curved earrings illuminate the face with their pure light, while a brooch of delicately chiseled and engraved mother-of-pearl evokes the spiraling flight of a feather through the air.

A pearl necklace bears a medallion representing a trio of feathers and is finished with a tassel, a signature motif of Maison Boucheron.

Illuminated by a multitude of pearls, the Question Mark necklace created by Frédéric Boucheron, which won an award at the Universal Exhibition in Paris in 1889, now acquires a new dimension, at once feminine and contemporary. Interpreted in an extra-large version, the peacock feather is resplendent with more than 100 carats of Akoya pearls and a sprinkling of round and baguette diamonds. An accompanying ring is set with a large Southern seas’ pearl resting on a bed of Akoya pearls and diamonds.

For this ensemble comprising an asymmetrical necklace and pendant earrings, the jeweler leaned towards a more graphic interpretation of the feather motif. Mother-of-pearl is set with delicate lines or tiny halos of diamonds, creating a play on texture that fully reveals its radiance.

Inspired by a diadem dating back to 1906, the Battement d’Ailes set combines the brilliance of diamonds with the luster of mother-of-pearl. On the choker, which is open in the middle, two diamond-set wings, resting on two rows of feathers in engraved mother-of-pearl, seem about to take flight. The asymmetrical earrings are crafted from the same precious elements, while the ring, whose two wings surround a nearly 2-carat, pear-cut diamond, replicates the design of the original diadem. 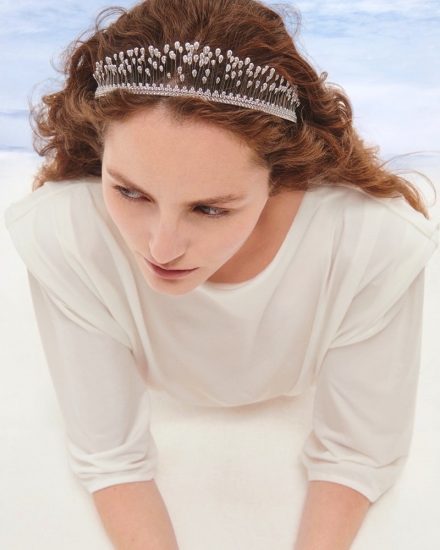 Capture the flight of a swallow. This graceful bird, whose soaring, swooping movement is an invitation to contemplation, belongs to the bestiary of Maison Boucheron. The Ailes du Vent theme was inspired by a gold and diamond hair ornament from 1895. Today, the swallow becomes the central motif on a pearl and diamond necklace, which can be worn as two strands or as a sautoir. The diamond-set bird, meanwhile, transforms into a brooch.

The illusion of a butterfly landed on a shoulder. This symbol of the fleeting nature of existence is fashioned from rock crystal and set with diamonds. An ingenious system of magnets means it can be attached easily and worn in many different ways.

The Flèche du Temps theme seems to have flown through time, with the first drawings of this motif in the Boucheron archives dating back to 1873. The clean-cut modernity of the arrow is now mirrored by a contemporary way of wearing it. Indeed, this High Jewelry ensemble can easily accompany everyday life – witness the gold torque paved with diamonds and its matching bracelet. Or the earring in diamond-paved gold and mother-of-pearl which shoots upwards through the ear. Last but by no means least, a large brooch hits the target with true brilliance.

A “murmuration” is a vast flock of birds swirling and whirling in the sky. Boucheron has illustrated this majestic sight by laser-engraving it within the rock crystal of a torque with an invisible opening. Captured forever in the crystal, the birds fly gracefully between five diamond-set bands. Similarly, the spectacle can be contemplated through a ring and bracelet in diamonds and rock crystal, while a long asymmetrical earring in gold and diamonds, brings the birds’ song closer to the ear.

“I wanted to evoke a cloud surrounding a woman’s throat, rather than represent one literally”, explains Claire Choisne. But how could it be possible to replicate, in jewelry, the vaporous effect of the millions of minute droplets which come together to form a cloud in nature? Maison Boucheron consulted a programmer, who devised an algorithm to bring this unique cumulus to life. It took two years to develop the materials for this unprecedented necklace, which consists of 9,786 titanium threads capped with 5,371 diamonds and 4,415 glass beads simulating the droplets of water. Extraordinarily light, and following every movement of the neck, this Nuage en Apesanteur does indeed appear weightless.

Boucheron has laser-engraved the gray mother-of-pearl dial of Épure Miroirs Infinis with a 3D image of clouds, whose presence is illuminated by diamonds. At seven o’clock, a flying tourbillon designed by Ulysse Nardin, the master of high watchmaking complications, reveals its ceaseless and mesmerizing movement.

Likewise, Épure avant le Frisson features a dial decorated with 3D white dandelion seeds and a diamond-set crown, as well as a flying tourbillon which seems to float in the air until the end of time. 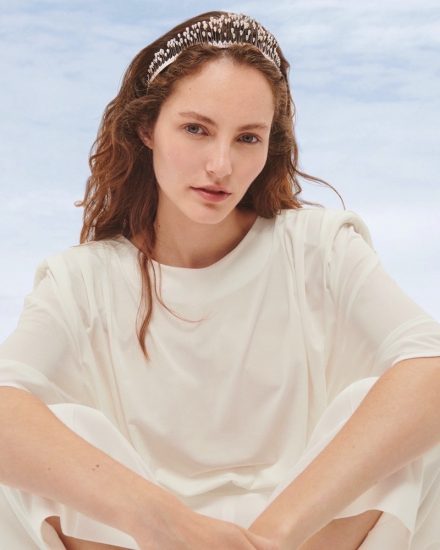