The first edition of Breakout Dxb, a brand-new music, culture and arts event, is just days away! Created for the community by the community, Breakout Dxb will showcase a jam-packed line-up of homegrown musical talent and creative content, both indoors and out in the open air, all day and into the night, on Friday and Saturday, the 6th and 7th of November, at Rove Downtown.

The brainchild of Lobito Brigante and Dan Bolton, in partnership with Rove Hotels – Breakout Dxb aims to support Dubai’s community of homegrown creative talent: musicians, artists and creatives who have faced unprecedented challenges as a result of the current pandemic.

Here’s what to expect from the ground-breaking two-day event:

A WEEKEND OF THE BEST HOMEGROWN MUSICAL TALENT

Breakout Dxb will feature a diverse and inclusive line-up of music performers, including:

Emirates Music Summit (EMS) will curate a series of highly anticipated panel and one-on-one discussions at Breakout Dxb, organised by Albert M. Carter, Ali Al Dhiyebi, and Lobito Brigante. EMS is at the forefront of thought leadership in the UAE’s music industry, and the aim of these discussions is to foster a collaborative culture within the local music industry and support homegrown creativity and innovation in the community. 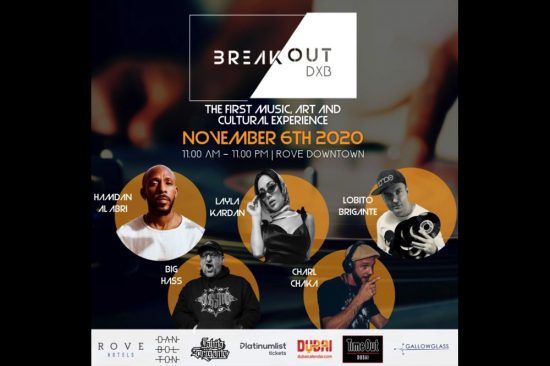 A wide range of important topics are set to be discussed over the weekend, such as, ‘UAE Music Scene During Covid’, ‘The Importance of Songwriting’, ‘Women’s Point of View’, ‘Berklee Info Session’, ‘The Art of Production’, ‘Business Women – Culture, Technology & Legal’, and more. The EMS discussions will feature an extensive list of music industry insiders and performers, including:

Breakout Dxb will feature fun and immersive activations, including a retro and indie video game tournament, bringing everyone’s favourite retro games to a cinema screen for a unique gaming experience. The event will also feature live art installations and a full gallery, as well as fashion installations and a full marketplace of some of the leading vendors in the city throughout the day and night.

PLENTY FOR ALL THE FOODIES

Breakout Dxb has all the foodies covered with lots of unique food experiences to be found at the Rove Food Trucks, along with exclusive new Monster Burgers from TGI Fridays, and more.

Breakout Dxb is being organised in accordance with the highest safety standards, without negatively impacting on fans’ collective enjoyment. Organisers have partnered with Gallowglass: industry leaders in ensuring events across the world comply with health and safety regulations, including the recent UFC Fight Island events at Yas Island.

Additionally, Bureau Veritas, a world leader in testing, inspection, and certification (TIC) services, has named Rove Hotels the first mid-scale brand in Dubai to receive its SAFEGUARD Label. This certification means that guests and fans alike can rest assured that Rove Hotels have full compliance under global safety, hygiene, and cleaning requirements.

There is a very limited capacity for Breakout Dxb, and tickets are selling fast, so get yours now from from Platinumlist HERE.

Rove Hotels is an award-winning lifestyle hotel brand, offering well designed hotels in connected locations. Designed for the traveller who likes to explore without borders, receive fuss-free service and some touches of local culture. Rove Hotels defines a new niche in the ever-evolving global hospitality sector.

Rove Hotels are reliable, modern and efficient. Regardless of their location, Rovers (guests) will always find locally inspired modern interiors, relaxed service and all the essentials to enjoy their stay.

Born in Dubai, Rove Hotels is a joint venture between Meraas Holding and Emaar Properties PJSC.

The first Rove hotel opened at Downtown Dubai in 2016 and the brand now has over 4000 rooms open or under development across the Middle East. Rove Hotels continues to target properties in well-connected locations and further expansion announcements will follow soon.

Lobio Brigante is a multi-award winning turntablist and international touring DJ based in Dubai, named a “musical mastermind” by TimeOut magazine and a “regional cultural leader” by the British Council.

He has performed at major festivals playing to 37,000 people alongside acts such as Snoop Dogg, Fatboy Slim, Aloe Blacc, Stevie Wonder, De La Soul and many others as a solo artist as well as performing as a tour/backing DJ for hip hop legends The Beatnuts and Grammy award winning artist Phonte. He has received acclaim from pioneers of turntable music and other hip hop legends such as ISP, The Beat Junkies, Public Enemy, Rock Steady Crew, Jazzy Jeff and many more.

Lobito is the founder of Street Nights, Dubai’s original street art and culture festival and a pioneering event that changed the Dubai event landscape that helped bring food trucks, wooden pallets and street art into broad acceptance across Dubai and earning it the Best Art & Culture event at the Middle East Event Awards.

Lobito is also the creator of the Turntable Symphonograph Orchestra, the world’s first performing turntable orchestra launched at Louvre Abu Dhabi in 2018. He regularly performs at major regional and international festivals such as Sole DXB as well as providing music consultancy to 5* hotels and was selected as an official DJ for Expo 2020.

Dan Bolton is a prominent artist director and creative producer with over 21 years experience and an extensive global network in the live events, entertainment and performance industry.

Specializing in artist management, choreography and the conceptualization, creation and delivery of live performances, working alongside brands and clients to create unique and compelling performances for events such as ceremonies, corporate launches, public spectacles and more around the globe.

Dan’s recent credits include the recent Expo 2020 Dubai one year to go festivals in his role as programming director, the 2019 Philippines South East Asian games opening and Closing ceremonies as segment producer, Jakarta Palambang Asian Games 2018 opening and closing ceremonies where he was the associate choreographer and chartist as well as Artist director for the inauguration of the Louvre Abu Dhabi in 2017.

With a passion for live performance, complimented by a substantial network of leading local and international performance & creative talent, Dan and his team have the ability to create world class performances and shows.