Dr. Thumbay Moideen – Founder, President Board of Trustees, GMU honored with ‘Golden Apple’ for his visionary leadership and relentless pursuit of excellence.

Gulf Medical University (GMU), Ajman founded in 1998 by Dr. Thumbay Moideen & Owned by Thumbay Group, celebrated its 22nd anniversary in a special event at the University campus, attended by the chief guest Dr. Thumbay Moideen – Founder, President Board of Trustees of GMU and presided by Prof. Hossam Hamdy – Chancellor of GMU, in the presence of the Vice Chancellors, Deans, Faculty and Staff and a number of students who watched the event streamed live on YouTube.

The academic leadership of the University, headed by the Chancellor honored Dr. Thumbay Moideen with a ‘Golden Apple’ memento at the event, in honor of his visionary leadership and foresight which laid the seeds of GMU’s excellence and continue to take it to newer heights. “23 years ago, there was no Gulf Medical University, but through Dr. Thumbay Moideen’s vision, leadership and hard work and above all his ethical values, we now have this magnificent campus and a strong reputation as the biggest specialized leading medical university in the region having 6 Colleges 26 accredited programs and having more than 4000 students which include full time & students perusing Certificate programs. 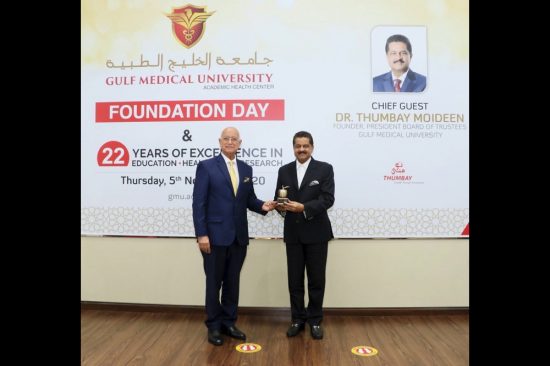 “This honor is to acknowledge his role in shaping the future of the region’s healthcare industry, and for producing the next generation of healthcare professionals who bring laurels to the University and the country. Dr. Thumbay Moideen’s efforts are commendable and truly deserve the golden apple honor, Dr. Thumbay Moideen is the First Recipient of the Golden apple Award by GMU.

The event also witnessed the official launch of the ‘BA Center for Online Education’ at Gulf Medical University, in honor of renowned Indian businessman and philanthropist, the late Dr. B. Ahmed Hajee Mohiudeen, Founder of BA Group India, and father of Dr. Thumbay Moideen. The center would design and deliver online professional education to medical professionals, students and individuals around the world, through a range of certificate programs.

Also, part of the event was the formal announcement of the GMU Alumni Association Board, was announced.

Wishes from all over the Globe poured in from various Board Member, 60 Partner Institutions and Various Alumni from different countries wished the Founder and GMU team for all the developments and Achievements.