Dubai, UAE, 17 November 2020: Arabian Automobiles Company (AAC), the flagship company of the AW Rostamani Group and the exclusive dealer for Nissan, INFINITI and Renault in Dubai, Sharjah and the Northern Emirates, is proud to announce they have received the Dubai Service Excellence Scheme Mystery Shopping – Best Performance Brand award in the “Specialized Retail” category by Dubai Economy.

Michel Ayat, Chief Executive Officer of Arabian Automobiles, said: “AAC has proudly been the recipient of this award across its brands for the past consecutive six years. This year’s win is the second for Renault and consolidates our meticulous emphasis on customer service. We are grateful to the Dubai Economy for its recognition and for helping uplift and support the quality of service being offered throughout the Emirate and to our team for consistently raising the bar year on year.” 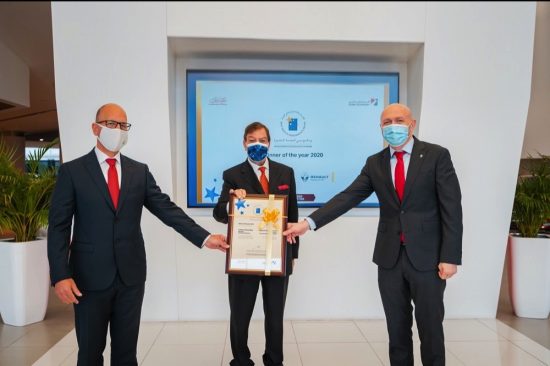 Arabian Automobiles became the first automotive company in the UAE to be awarded the prestigious ‘Dubai Quality Gold Award’ by Dubai Economy in May 2017. In the same year, INFINITI won ‘Best Performing Brand’ in the automotive category of the Dubai Service Excellence Scheme; an accolade previously won by Nissan in 2016 and Renault in 2015. In 2015, Arabian Automobiles received the Mohammed Bin Rashid Al Maktoum business award for most outstanding performance and in 2013 it became the first private company in the UAE to be inducted into the prestigious Palladium Balanced Scorecard Hall

of Fame for strategy execution. Arabian Automobiles Company is currently the holder of Nissan Motor Company’s ‘Global Nissan Aftersales Award and is the only Nissan distributor to have won the award for ten years in a row.