As scenes depicting the original residents of the most prominent northern enclave of Sharjah rising up to valiantly fight off the invading Portuguese colonisers led by General Afonso de Albuquerque in 1507 unfolded on screen, a quiver swept through the rapt audience of 2,500 spectators yesterday (Wednesday) evening at the Khorfakkan Amphitheatre, during the second screening of the grand historical epic, Khorfakkan.

As the epic scenes were projected on the giant screen at the amphitheatre, the packed crowd – representing a bigger audience than the one that attended the inaugural screening – reacted passionately with several members becoming emotional at the depiction of valour by their ancestors. Adults and children alike were moved to tears of joy, as they watched the inspiring two-hour film while adhering to precautionary measures implemented by the venue. 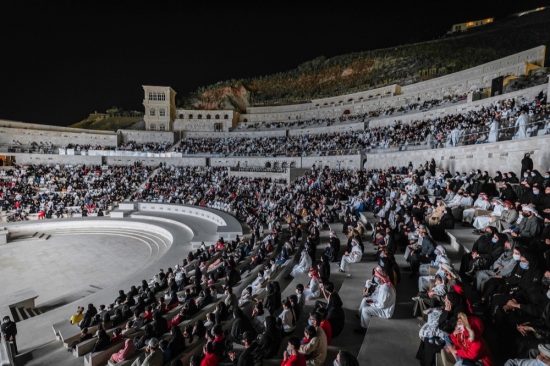 The film is based on the historical treatise Khorfakkan’s Resistance Against the Portuguese Invasion of September 1507 by His Highness Sheikh Dr. Sultan bin Muhammad Al Qasimi, Member of the Supreme Council and Ruler of Sharjah.

A fantastic display of fireworks lit up the sky as the show concluded, reflecting the elation and sense of patriotism Khorfakkan aroused in the viewers.