Al Ain, United Arab Emirates- [ AETOS Wire ]: Al Ain Film Festival has announced the launch of its third edition, Under the patronage of H.E. Sheikh Sultan bin Tahnoon Al Nahyan member of the Executive Council, which will take place in Al Ain city, between 23rd – 27th of January 2021, under the slogan “Future Cinema”.

In which the Festival continues to support local and Gulf filmmakers by implementing new initiatives, various programs, distinctive shows and agreements, in the service of “the 7th Art”, to be the most prominent platform for discovering and presenting the best productions and talents of cinema in the region. 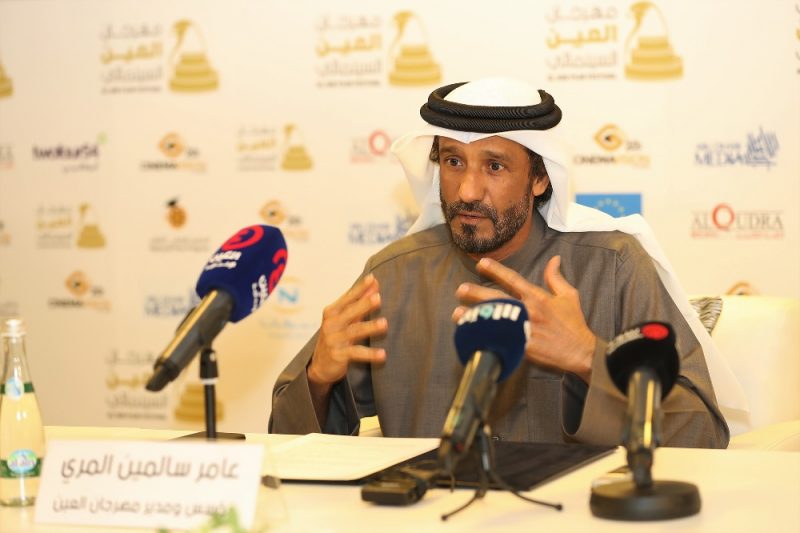 The Festival was announced during a press conference held yesterday, attended by Amer Salmeen Al Murry, Founder and Director General of the Festival, Hani Al Shaibani, Art Director, and Saeed Salmeen, who joined the Festival management to take over the task of Art Director of the program “Cinema Of The World.

The Third Edition of Al Ain Film Festival 2021 offers the audience of the “Golden Screen” a bouquet of distinctive events, which celebrate the most prominent filmmakers, of professionals and fresh young talents over a period of 5 days. After the impressive success of the First and Second Editions of the Festival, with the testimony of the audience as well as the critics, which enables the Founder and Director of the Festival, Amer Salmeen Al Murry, to achieve his ambition by including the name of “Al Ain” city, on the map of international festivals, and supporting the young Emirati talents.

Amer Salmeen Al Murry, revealed during the conference, that he had reached an agreement with the “European Union” office, whereby a bunch of distinctive European films, that have met with success in Europe and some of international film festivals, will be displayed during the Festival. Different European countries show high interest in collaborating with the festival, with the aim of exchanging experiences and cultures in this field, and providing an opportunity for Emirati and Gulf audiences, to watch various films of high artistic value.

Through its summer program of the weekends, the Festival will display a group of European films, and each week will be devoted to a specific country, in addition to organizing workshops by filmmakers from many European countries.

“Fareed Ramadhan” award for the best screenplay for a long Gulf film, is one of the new and distinctive awards that Amer Salmeen Al Murry revealed during the conference, and was intended to encourage the scriptwriters as well as to honor the spirit of the late Bahraini writer and screenwriter, Fareed Ramadhan, who had a prominent presence in the First and the Second Editions of the Festival, and his writings have enriched Bahraini and Gulf cinema in general.

The General Manager of Al Ain Festival expressed his pleasure to collaborate, in this edition, with Abu Dhabi Festival, one of the leading cultural events locally and internationally, as the Festival’s strategic cultural partner, and Al Ain Film Festival announced the opening of submission through its official website, for a new competition entitled “Abu Dhabi Festival Unproduced Screenplay”, Targeting young Emirati scriptwriters, to create a new generation, that can enrich local content with fresh unique topics presented to cinema. Three prizes have been allocated to this purpose, best three unproduced screenplays (short film), at a value of 20 thousand dirhams each, with support of Abu Dhabi Festival, as Al Ain Film Festival prepared the conditions and regulations for the competition, in which the winners will be disclosed in June 2021 after the evaluation and selection processes that will be conducted by a special jury for this competition, consisting of a group of Arab filmmakers and scriptwriters.

H.E. Huda I. Alkhamis-Kanoo, Founder of Abu Dhabi Music & Arts Foundation (ADMAF) and Artistic Director of Abu Dhabi Festival “We are proud to support Al Ain Film Festival (AFF) as a thriving part of the nation’s vision for the development of film in the UAE and as an influential celebration of local and international achievements in cinema.”

Her Excellency added: “Together with AFF, we are committed to continuing our work to cultivate the nation’s film industry and our investment in Emirati youth to empower them to realize their artistic ambition and develop their creative abilities. Throughout ADMAF’s 25 years, our work has contributed to the sustainable development of film and all the arts. Our partnership with AFF is an invaluable opportunity to support Emirati directors and launch many outstanding new films through this prestigious Arab and international film festival.

As the 3rd edition of AFF gets underway in these challenging times, it is more important than ever to continue ADMAF’s ongoing efforts to foster a culture of cinema in the UAE.”

Achievements of the Artists

The Festival manager revealed that in the new edition of “Al Ain Film Festival”, and as a part of “Honoring Artists’ Achievements” program, a group of art professionals will be honored, for their artistic career full of many achievements in the world of film industry, and their great contributions to the advancement of the “Seventh Art”. They are Sheikha Alyazia Bint Nahyan, Emirati director Nujoom Al-Ghanem, and the late Bahraini writer and screenwriter Fareed Ramadhan. He said: “Al Ain Film Festival raises the slogan “Future Cinema”, but we cannot forget those who have served this art for many years, and I am pleased that the 3rd Edition of the Festival will honor Emirati and Arab, who have made rich and important additions, throughout their artistic experience.

Among the new initiatives that “Al Ain Film Festival” is witnessing in its 3rd edition, is an exceptional competition entitled “Make Your Film in the Time of Corona”. It is a competition that gives the filmmakers an opportunity to benefit from the quarantine, by filming a short film, with a duration of 3 to 15 minutes, revolving around Details of daily life in light of the quarantine imposed by the Corona pandemic, and the competition that was announced in the summer of 2020 was met with great participation by Emiratis and residents of various nationalities in the country. For this competition, the festival allocated two awards, the first for the (best film) and the second for the (best idea).

The exceptional difficult circumstances imposed by the crisis of the repercussions of “Covid-19” on the world, have not prevented filmmakers from participating in more than 378 films, which confirms their confidence in the Festival, which is taking steady steps towards achieving its goal of “a bright future for cinema”. Films of all kinds have been chosen. From fiction and documentary, long and short, which will compete with each other for prizes in the official competitions: Falcon Emriati Film, Falcon Gulf Feature Film, Falcon Gulf Feature Short Film, Falcon Student Films, Falcon Resident Films, and the special competition of the 3rd Edition of the Festival “Make Your Film in the Time of Corona”.

Al Murry affirmed that the Festival’s management has challenged the exceptional conditions that the world is experiencing today as a result of “Covid 19” and decided to organize the 3rd Edition of the Festival, but in return it adapted a new plan that guarantees adherence to the necessary preventive and precautionary measures, to ensure the health of the public and those in charge of the Festival, as it has set a capacity for show halls to ensure physical distancing, as well as some virtual events, similar to some international festivals.

Hani Al Shaibani, Art Director of the Festival, said during the conference: “The Festival received a large number of films in all competitions, as the 3rd Edition witnessed a significant increase in the number of participating films by 35% over the previous edition, which confirms the importance of the Festival in creating a progressive cinematic activity in the UAE.

In his turn, Director Saeed Salmeen expressed his happiness to join the Festival’s management and assume the task of Art Director of the “World Cinema” Program, and confirmed that he, in turn, will contribute to a greater activation of the program, by presenting a number of successful and distinctive foreign and Arab films to the local audience.

It is noteworthy that “Al Ain Film Festival” presented in its 2nd Edition 54 films that participated in the official competitions of the Festival, 15 of which were in the world premiere, representing the UAE, Saudi Arabia, Bahrain, Kuwait and the Sultanate of Oman. The winning films have got 10 prizes in various competitions of the Festival, and 4 award winner feature films in the “Cinema of the World” program, were shown in the previous edition.

In its 2nd Edition, the Festival met with great success in terms of organization and quality of the participating films, with the testimony of Gulf, Arab and foreign guests.