Esophageal ruptures are tears that penetrate the wall of the esophagus. Ruptures can be caused by surgical procedures, severe vomiting, or swallowing a large piece of food that chokes the esophagus, and some ruptures occur spontaneously. A rupture allows food or fluids to leak into the chest and cause severe lung problems. Common symptoms are difficulty swallowing or vomiting followed by severe chest pain, difficulty breathing and speaking, neck and shoulder pain, increase in upper or lower back pain discomfort when lying down flat, rapid breathing and heart rate, fever and in rare cases bloody vomit.

Mr. Shajimon, 47 years old expat from Kerala India, experienced left chest pain and shortness of breath with no clear history of gastric complaints. He immediately visited the Emergency department at Zulekha Hospital Sharjah.  His treating doctor Dr. Khaldoon Abo Dakka – Specialist Thoracic Surgeon performed a Chest X-ray which confirmed Left Hydropneumothorax (an abnormal presence of air-fluid level in the chest). Dr. Khaldoon treated the condition by urgent insertion of left chest tube in his left chest cavity to re-expand his collapsed lung and an additional sample of dark hazy fluid was collected for a culture test.

As further investigation continued, Esophago-Pleural fistula (abnormal connection between chest cavity and esophagus) was suspected due to a large output of pus from chest drain and confirmed by a Chest CT Scan due to spillage of the given oral contrast into the left chest cavity, which is a life-threatening situation. Signs of severe infection became prominent and wide spectrum antibiotics were increased as part of the ongoing treatment. 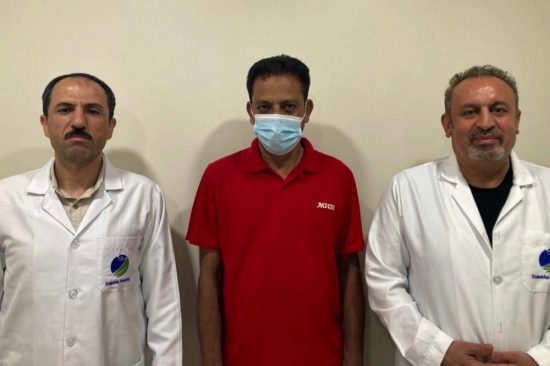 Dr. Khaldoon highlighted “This is a life-threatening case called Boerhaave Syndrome, a spontaneous Rupture of Lower Esophagus due to high intra-esophageal pressure caused by severe vomiting with high mortality rate, which happens when there is a delay in seeking urgent medical advice. As the patient had severe acute gastritis complicated by severe vomiting which lead to the esophageal tear, Dr. Mouhammed Mounier – Specialist Gastroenterologist supported the team in sealing the damaged area from inside and an Upper Endoscopy was done which shows a two cm tear in the lower esophagus. Dr. Mounier managed the situation by urgent insertion of covered metallic stent to seal the leakage of harmful gastro-esophageal contents into the chest cavity. Parenteral nutrition was started as oral feeding was completely on hold. After stabilization of the patient, Dr. Khaldoon did a Left Thoracoscopic debridement of multiple separated collections of thick infected deposits which had developed and prevented expansion of the left lung. The site of the leaking fistula was inspected and a special spiral drain was kept near it to guide any possible leakage outside the chest, until complete healing of the esophageal tear. Both procedures went up to a total of four and half hours. Patient has completely recovered and is back to his normal life with normal oral feeds. The stent was removed from the esophagus as well as the chest tubes. The recovery time was 27 days (two weeks on IV feeding, once week on clear liquid diet, and followed by semisolid diet).”

Risk factors includes high mortality rate if diagnosis has been missed  when the patient first sees the doctor, especially as he hadn’t given his history of vomiting, and severe uncontrollable chest infection due to the leaking contents.  A primary surgical repair of the esophageal rupture would not be possible after 12 hours of onset. The respiratory complications pre and post the thoracic surgery procedure, displacement of the sealing stent, patient nutrition management would not have been possible and would result in a long hospital stay until complete healing of the tear.

Early clinical diagnosis and imaging is important for case management to achieve a good outcome. Zulekha Hospital provides complete care to such patients with multiple complications, using a multidisciplinary approach for evaluation and management of diseases, in cooperation with all relevant specialties and other correlated department.

About Zulekha Healthcare Group
Zulekha Healthcare Group is among the forerunners in UAE healthcare. Today the Zulekha Healthcare Group includes two multidisciplinary hospitals in Dubai and Sharjah, as well as four UAE medical centres and four pharmacies providing specialised treatments in over 30 disciplines. The Group has a multidisciplinary Hospital in India – Alexis. Zulekha Hospital has received extensive recognition for its commitment towards quality care and sustainable business practices, and recently received the prestigious Dubai Quality Award for the second time in four years, underling a commitment to providing high quality healthcare to patients and society.