18 May 2021, Dubai – The Age of Discovery ended in the 17th century. But there are still many places on earth today that offer the emotions of a discoverer. The aim of the Arctic Trucks team is to improve the means of exploring new destinations.

The Russian pick-up market is not too rich in models, and the package for enjoying full off-road confidence – Arctic Trucks AT35 exists only in some of them. The current generation of the Mitsubishi L200 is now also available in Russia with the Arctic Trucks AT35 retrofit package. In its creation, we used a modern approach to design, went through scrupulous selection of equipment, prototyping of components, approval of the final design, design and manufacture of technological accessories. The result of this work is our proud Mitsubishi L200 AT35, which has improved its off-road capabilities and now makes more frequent and efficient use of Mitsubishi Super Select 4WD-II’s signature all-wheel drive system for the most varied and demanding tasks on the road.

An important feature of the Arctic Trucks package has always been the retention of the ideas that the manufacturer has incorporated into the vehicle’s exterior. The optional extras on the exterior of the Mitsubishi L200 AT35 take into account the geometric proportions of the body and follow the main curves of the vehicle’s front end. Thanks to such an approach, Mitsubishi L200 AT35 has kept its imposing appearance, not hiding its adventurous nature.

By upgrading the suspension and increasing the side tyre profile height, we have alleviated the shortcomings inherent in the pickup body, while a large selection of certified attachments allows customers to be more flexible and practical in equipping their Mitsubishi L200 AT35. 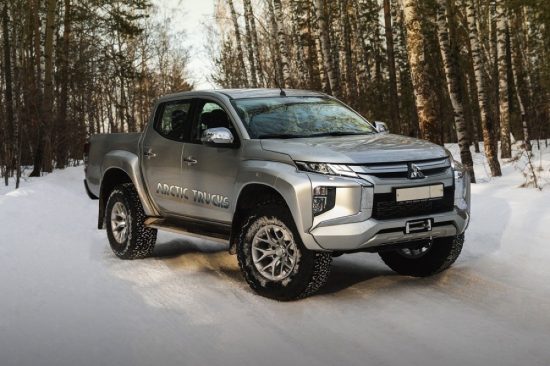 Sales of the Mitsubishi L200 AT35 will be available throughout Russia. The vehicles can be ordered for production remotely via any convenient means of communication.

Vehicle modifications must be executed in accordance with the requirements of the regulations in force in the EEC.

Information on technical data, equipment features and the latest photos and videos of the Mitsubishi L200 AT35 can be found on the official website arctictrucks.ru.

About ARCTIC TRUCKS ME: Arctic Trucks specializes in modifying 4WD vehicles for use in rough environments, for example in the mountains, in the desert and on glaciers. Originally based in Iceland, the company started its operations in the UAE in 2010 in close cooperation with Al Futtaim Motors. The origin of Arctic Trucks can be traced back to the end of 1980’s, and then in 1990 they also started working with Toyota to modify 4WD utility and sport utility vehicles in Iceland. Since then the business has grown significantly, building up great experience and knowledge giving them world-renowned expertise in the field of SUV modifications. Arctic Trucks has participated in three major expedition projects outside of Iceland. The first one was an expedition to Antarctica, organized by the Swedish Polar Institute in cooperation between Sweden, Norway and Finland in 1997/1998. In the spring of 1999 Arctic Trucks took part in an expedition across the icecap of Greenland, where the participants drove in the footsteps of Fridtjov Nansen, the first man ever to cross the Greenland icecap. The latest project of Arctic Trucks was an expedition with BBC Television‘s Top Gear show, Toyota GB and Polar Challenge to the Magnetic North Pole. In 2010, Arctic Trucks also set a Guinness World record for the fastest overland journey to the South Pole, crossing 2308km of the Antarctica High Plateau from Novo to the South Pole in 4.5 days