To commemorate 100 years since Peter Carl Fabergé passed away, Fabergé has crafted an extraordinary, one-of-a-kind egg objet. Handcrafted in 18k yellow gold, and weighing an astonishing 10kg, this unique objet takes inspiration from the first-ever Imperial egg, the 1885 Hen Egg, as well as the 1887 Third Imperial Egg. The Centenary Egg, set to be a future heirloom, features gold fluting, a technique for which Peter Carl Fabergé was renowned, and which featured heavily in his early works of art. The egg is also set with spectacular Gemfields Mozambican rubies and Zambian emeralds, giving it a contemporary and colourful twist and complementing the white diamonds which line its circumference.

The majestic eggs created for the Russian Imperial family are the most celebrated and awe-inspiring of all of Fabergé’s works of art and are inextricably linked to the Fabergé name and legend. Today, Fabergé takes inspiration from these outstanding pieces to create new and exciting objets d’art. The Centenary Egg, while inspired by the past, exudes modern-day textures and decorative features. The rubies and emeralds have been acquired from Gemfields, a world-leading supplier of responsibly sourced coloured gemstones.

Gemfields gemstones are mined in Africa: rubies from Mozambique and emeralds from Zambia. Responsible sourcing for Gemfields means implementing industry-leading policies and practices across operations, transparency in the auction sales process, an active role in working groups to modernise the coloured gemstone sector, projects to improve health, education and livelihoods for the communities around the mines and conservation efforts to protect Africa’s great wildlife and biodiversity. 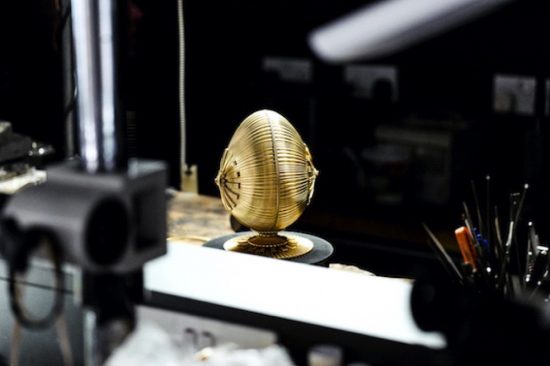 The gold fluting decoration is a trademark style seen in many of Peter Carl Fabergé’s exquisite pieces, which ranged from jewellery to picture frames, cigarette cases and other objets d’art. The artful fluting brings out the beauty of the gold by creating curved surfaces and mixed levels that create contrasting light and shadow. The fluting at the front and back of the egg have been arranged in clusters of different widths to create a rhythm that is uniform, but not repetitive. The design for this piece has a magnificent ‘sunbeam’ pattern, which creates a feeling of energy and happiness that quite literally radiates from within, with a Gemfields emerald set in the centre on one side, and a Gemfields ruby on the other.

Above Left: Fabergé Gold Cigarette Case, circa 1896. Courtesy of The Fabergé Heritage Collection

The Third Imperial Egg was created for Tsar Alexander III and presented to his wife, Maria Feodorovna, on Orthodox Easter of 1887. The egg was created in Louis XVI style and consists of a solid 18k gold fluted case resting on a gold “annulus” (ring) with waveform decorations held up by three sets of corbel-like legs which end in lion’s paws. 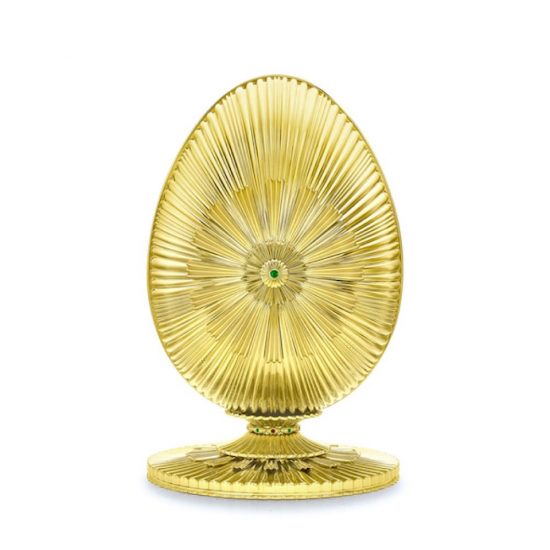 An investment-worthy collector’s piece, the new solid gold Centenary Egg is a symbol of lasting value, not dissimilar to the Hen Egg, which in 1885 marked the start of Fabergé’s illustrious relationship with the Russian Imperial court, when Peter Carl Fabergé became its official goldsmith and jeweller. The Centenary Egg is a modern-day heirloom, and perfectly illustrates Fabergé’s ability to create precious time capsules that epitomise eternal beauty.

Josina von dem Bussche-Kessell, Global Sales and Business Development Director of Fabergé, says: “We are very pleased to present this exceptional piece. Paying homage to Fabergé’s goldsmithing past, the Fabergé Centenary Egg is uniquely modern and references the beauty of the unique and the rare.”

Price available on application. To book a personal appointment to view the egg objet, please contact sales@faberge.com to speak with a member of the ‘By Appointment’ team.