Azizi Developments, a leading private developer in the UAE, has announced the swift progress of the infrastructure at Riviera, Dubai’s new French Mediterranean-inspired landmark destination. The master developer has poured over 41,000m3 of asphalt for more than 8km of roads, has laid over 600,000 bricks across 60,000m2 of sidewalks and has erected 19 lamp posts and 24 traffic lights, among many other updates.

Two new intersections have already been finalised, comprising 10 vertical-, 6 pedestrian- and 6 high L-shaped signals. Two double lane roads have now also been poured and lined with lamp posts, as well as with beautifully brick-paved sidewalks. Drainage and water systems, as well as the laying of telephone line cables, have already been completed for the entire community. 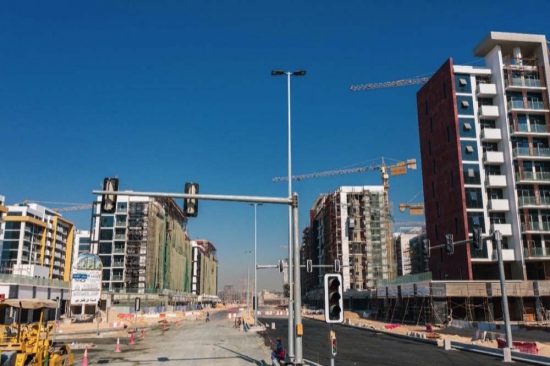 Mr Mohamed Ragheb Hussein, Chief Development Officer at Azizi Developments, said: “It fills us with immense pride and joy to see the infrastructure at our flagship development progressing so rapidly, and the entire community visibly coming to life. Riviera is a testament to our vision of creating a city within a city, with world-class residential and commercial buildings that will be home to thousands of happy families from different walks of life, and that will enrich their lifestyles and elevate them into a new paradigm of elegance, convenience, comfort and well-being, coupled with a true sense of belonging.”

Riviera, a stylish waterfront-lifestyle destination located in the heart of MBR City, is planned to comprise 71 mid-rise buildings with approximately 16,000 residences upon its completion that are conveniently located in the midst of all the business, leisure and retail hubs of the city.

Designed to introduce the French-Mediterranean lifestyle to Dubai, which is not merely about architectural art but also about a certain ‘joie de vivre’ — a celebration of life, an exultation of spirit, Riviera represents a new landmark destination that is both residential and commercial, with an abundance of retail space.

With its strategic location near the upcoming Meydan One Mall and the Meydan Racecourse — home of the Dubai World Cup — as well as Dubai’s most noteworthy points of interest, Riviera represents one of Azizi Developments’ most coveted projects.