OWN A PIECE OF BRITISH HISTORY AS LUXURIOUS HOMES AT THE OWO,

Closed to the public for decades, today marks the launch of The OWO Residences by Raffles
in Whitehall, London

The OWO Residences by Raffles

Today marks a pivotal moment in the history of one of London’s most iconic buildings as sales of The OWO Residences by Raffles, Europe’s first Raffles branded residences, are launched. Offering a rare opportunity to purchase a piece of opulence where royalty once walked, The OWO Residences has 85 distinct homes available in the impressive Grade II* listed building, which has been closed to the public for over a century. Having undergone a monumental and painstaking transformation over the last five years, the London landmark is set to complete in 2022 and will also comprise the capital’s first Raffles hotel with 125-rooms and suites, a collection of nine restaurants and bars, and an immersive spa.

Situated at one of London’s most historically important and powerful addresses on Whitehall, alongside London’s great ceremonial route, the building originally completed in 1906 and designed by British architect William Young, is steeped in history. Formerly the site of the original Palace of Whitehall, home to Henry VIII and other monarchs, the building has witnessed world-shaping events whilst inspiring Ian Fleming to write the infamous James Bond series. Its grand architecture has made the building a dramatic location in Bond films, and more recently The Crown drama series.

Grand in both size and stature, with ceiling heights in residences that reach up to 4.4m and full-length windows to match, the interior proportions reflect classic Edwardian architecture that has been adapted for modern living. The residences feature interiors created by design studio 1508 London with bespoke handcrafted kitchens from British brand Smallbone of Devizes, Waterworks brass ironmongery and Onyx marble. Many incorporate original heritage features such as oak panelling and mosaic flooring. The unwavering attention to detail in each residence demonstrates the years of craftmanship that have been applied to every aspect of the majestic building.

Each residence is unique and specifically tailored to suit its location in the building; duplex, lateral and penthouse residences range in size from studios to five-beds. In addition, two spectacular turret residences, elevated above the London skyline, offer a home like no other. In this unparalleled residential offering, homeowners will benefit from having all the facilities of a world-renowned hotel on their doorstep without having to compromise on the highest levels of privacy and seclusion within their home. This complex balance has been achieved thanks to the building’s majestic original architecture which lends itself perfectly to a mixed-use development of this stature. 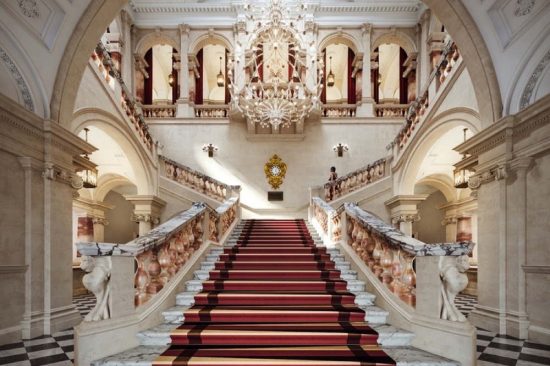 At the helm of The OWO project is the Hinduja Group, an international multi-billion turnover group founded in 1914 and passionately committed to the building since its acquisition in 2014. It has worked with a team of experts including Historic England and Museum of London Archaeology, and appointed EPR Architects to oversee the intricate redevelopment. The hotel interiors are being designed by New York-based designer Thierry Despont.

The Hinduja Group has partnered with world-renowned Raffles Hotels & Resorts, who will be operating the 125-room and suite flagship hotel at The OWO, as well as the 85 branded residences.  The service synonymous with the prestigious Raffles brand – gracious and intuitive staff, personalised attention and a timeless ambience – will be delivered seamlessly to the residents of The OWO and will set a new benchmark in London.

The OWO directly faces Horse Guards and is adjacent to the stunning 57-acres of St. James’s Park. Residents, hotel guests and visitors will be a short stroll from Buckingham Palace, The National Gallery, The Tate and The Royal Academy, as well as the sought-after shopping streets of Regents Street, Bond Street and Jermyn Street.   Sales are via Knight Frank and Strutt & Parker. Prices for a two-bedroom residence start from £5.8million. Media tours of the newly opened Marketing Gallery Suite at 5 St James’s Square can be arranged on request. 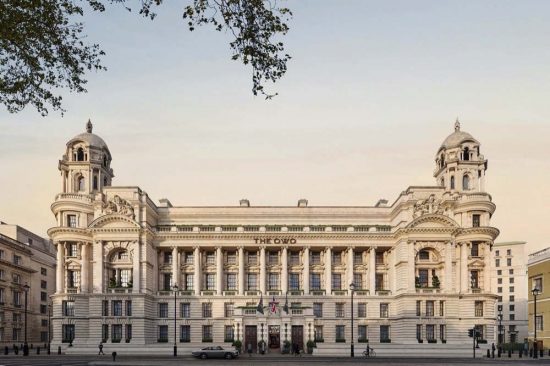 Raffles Hotels & Resorts boasts an illustrious history and some of the most prestigious hotel addresses worldwide. In 1887, Raffles Singapore set the standard for luxury hospitality, introducing the world to private butlers, the Singapore Sling and its enduring, legendary service.  Today, Raffles continues this tradition in leading cities and lavish resort locales, enchanting travellers with meaningful experiences and service that is both gracious and intuitive. Connoisseurs of life choose Raffles, not merely for its aura of culture, beauty and gentility, but for the extraordinary way they feel when in residence with Raffles. Each Raffles, be it Paris, Istanbul, Dubai, Warsaw, Jakarta or the Seychelles, serves as a venerated oasis where travellers arrive as guests, leave as friends and return as family. Raffles is part of Accor, a world leading hospitality group consisting of more than 5,000 properties and 10,000 food and beverage venues throughout 110 countries.