Max won a thrilling French Grand Prix that went to the wire and Sergio made it a double podium, the first for Red Bull Racing this season. It meant that, for the first time since 1991, Honda-powered cars have taken three consecutive wins.

It was a thrilling race decided by strategy and plenty of close fighting, and there were also points for Scuderia AlphaTauri in the competitive midfield.

After his crash at the start of qualifying on Saturday, we were required to change Yuki’s gearbox but also his floor for one of a different specification to the one used in qualifying. With suspension set-up changes too, that necessitated a pit lane start for him, meaning he could only join the race once the last car had cleared the pit lane exit.

Yuki started on medium tyres like the other three Honda-powered cars who all qualified on that compound yesterday, with rain on Sunday morning clearing to ensure a dry start.

Starting from pole position, Max retained his lead off the line but then a snap of oversteer at Turn 1 forced him to miss Turn 2 and yield the lead to Lewis Hamilton, with Sergio and Pierre holding station in fourth and sixth respectively.

In the opening few laps, Yuki made rapid progress to clear both Haas and Williams drivers after his pit lane start and was the first of our cars to make a pit stop as he switched to hard tyres on lap 15.

Pierre was next to stop on lap 17, responding to a threat from Daniel Ricciardo but unfortunately losing a position in the pit stop phase, while Max then came in on lap 18 in reaction to a Mercedes stop. Red Bull nailed this portion of the race as Max kept Valtteri Bottas at bay and then jumped Hamilton a lap later to regain the net lead, although Sergio went until lap 24 before pitting and re-joining in fourth.

With Max in the lead, he was under pressure from Hamilton and all drivers were worrying about tyre degradation, so Red Bull made the brave call to make another pit stop on lap 32, with Max stopping from the lead to fit medium tyres and try to chase down the top three. 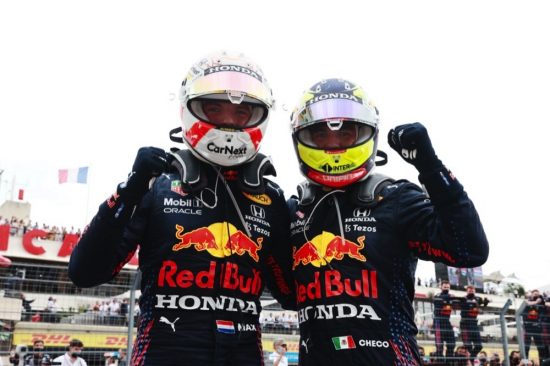 Sergio allowed Max through to hunt down the Mercedes pair and after setting a number of fastest laps, Max closed in and overtook Bottas for second with nine laps remaining. There was still a big gap to Hamilton though, and he continued the chase while Sergio caught Bottas and made a brave move around the outside of the high-speed Signs corner to take third place.

Eventually, Max got onto the leader’s tail with two laps to go and swept past Hamilton with a decisive move a lap and a half from the end to take his third victory of the season. With the fastest lap as well, he extends his championship lead to 12 points.

After a close fight with Lando Norris, Pierre managed to overtake the Ferrari drivers with some strong moves, taking what would prove to be the seventh place from Carlos Sainz on lap 36. From there he closed in on the McLaren pair ahead and was right on Daniel Ricciardo’s gearbox on the final lap but had to settle for six points after another impressive drive.

Yuki’s progress saw him rise as high as 11th place at one stage but after being one of the first drivers to make a pit stop his tyres faded late on and he was eventually classified 13th.

With Red Bull scoring 41 out of a maximum possible 44 points, the lead in the constructors’ championship has also been extended to 37 points over Mercedes, while AlphaTauri remains fifth but gained six points compared to Ferrari ahead. 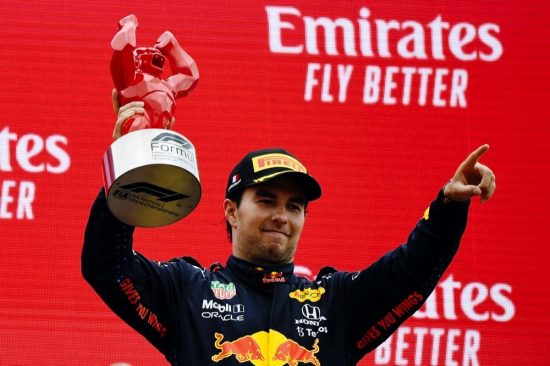 “ A fantastic win for Max Verstappen and Red Bull Racing Honda. With Sergio Perez third, we ended up with two drivers on the podium and this was also our third consecutive podium finish. Max dropped a place from pole after the start but running a different strategy to Mercedes, combined with a strong car and PU performance saw him retake the lead at the very end of the race with another great overtaking move. Perez ran his own race for most of the afternoon, on a different strategy to his team-mate and again, he was able to gain a place in the closing stages. For Scuderia AlphaTauri Honda, Pierre Gasly delivered another strong performance, to record his fifth consecutive points finish, showing how consistent he is. Having to start from pit lane, with a gearbox change following his qualifying crash, Yuki Tsunoda managed to show his pace, making up several places to finish 13th. The competition was very close all weekend and today’s race was very tough, but all elements of the team did a very good job. It is a very encouraging result for the upcoming races, starting with a double-header, both of them home races for Red Bull in Austria “

“ Winning this race was an amazing Team effort and to have a double podium at a track like this really shows the hard work everyone is putting in here and in Milton Keynes at our factory and Honda’s. Of course I would have liked to pull off into the distance and cruise ahead on my own but it doesn’t often work like that in Formula One and we really had to work for it today. You can see how close the two teams are and to win like this on strategy with two laps to go is very rewarding. It was certainly not an easy race and I got caught out at Turn 1 and lost the rear which meant I had to go off the track and lost a position to Lewis. I was of course upset at the time but I knew there was a long race ahead and I had to focus. In the first stint I didn’t really have the pace to fight with Lewis so we took the risk to pit first and to be honest I didn’t expect the undercut to work so well that I would come out ahead. They were pushing hard to try and pass me but luckily I could just about stay ahead and I knew I couldn’t make any mistakes. We decided to go for the two-stop strategy which worked out well as our car suited the conditions towards the end of the race as the wind became a little less and the track rubbered in. In the end, we made the right calls for both cars and it is great to be on the podium with Checo. We should all enjoy this for a few days until we get to Austria and start again. “

“ The Team did a fantastic job today with great strategy and making the right calls at the right time so well done to everyone here and back at the factory. It’s a great result for them which is what really counts and so I’m happy with that. On my side, this weekend wasn’t as good as I hoped it would be, as drivers we only want to win so I just have to keep working hard, continue improving and getting better results with the great car that I’ve been given. Back to back podiums is still solid points but I just needed probably three more laps to get past Lewis for the 1-2 finish, so we’ll keep pushing to get it at our home race in Austria. I think it will be very good for me to have two races back to back in Spielberg as the first race will give me much more of an understanding of how the car performs around there and as a result a better baseline for race two. Hopefully, we can be in contention for the win and continue this momentum.”

“ I think objectively it was a good race, we finished behind some strong competitors and we can’t be too dissatisfied with that. Obviously deep inside I would’ve liked to have finished even further up the grid in front of my home crowd, but it was a difficult race and I think we did the best we could’ve today. We lost two positions with the pitstop, both Ricciardo and Charles getting the undercut, and that cost us a bit. We’ll have to review the data and see if we could’ve done anything differently. I gave everything I could out there today, and we had some great fights, so I have to be pleased with that. At the end of the day, I think to finish P7 is still a strong race for us and we’re taking home some good points.”

The first lap was really good, I started from the pitlane and managed to make up three places. We got stuck behind the Alfa Romeos, who were on a different compound, so we tried to make the undercut work with the Hards. I had to push from the very beginning on that tyre though and by the end of the race, they were completely gone. Again, I have more mileage and race experience in a Formula 1 car so that’s really positive for me. I now just need to work on my Qualifying so that I can start the race further up the grid and have a better chance of scoring points.