For the first time in UAE, Dubai hosts the German Rapper “Baba of Babas” XATAR

Aras Group announces its readiness to open the first branch of the famous German restaurant “Haval Grill” on Wednesday 24 July, with the slogan “KoftesPieb, Aryan & Chill”. Haval Grill is located in Dubai, Jumeirah area and this will be the first branch of this chain outside Germany, and in the Middle East, North Africa and South Asia.

“Haval Grill” offers the most delicious dishes and the famous grilled kebab sandwiches, which are very popular, as they are prepared and cooked with a special secret mixture “Kofta Shebeez” and served with three different sauces to satisfy all tastes. In addition “Haval Grill” offers falafel with salad, and to complete the delicious taste, Laban Ayran is served with the meals to refresh the senses.

“Aras Group has signed a monopoly contract for the trademark in UAE and all the GCC. We are seeking to open more than one branch of “Haval Grill” in Dubai and all over the UAE before the end of this year” said Ashraf Mahmoud, Chairman of the Aras Group.

He added: “On the occasion of the opening and in celebration of Expo 2020 Dubai, we will host the German Rapper “Baba of Babas” XATAR, the owner of the original restaurant chain in Germany, who will visit Dubai for the first time to acquaint himself with this inspiring Emirate in the world of entrepreneurship, and to celebrate the opening of the first branch of the “Haval Grill”in Dubai. For that, we will soon run a competition on the social media accounts of “Haval Grill” with amazing giveaways to celebrate with our followers. ”

The ownership of the “Haval Grill” restaurant belongs to the famous German rapper Xatar, who opened several branches in Germany in several cities such as

Bonn, Essen and in Munich. In addition because of the high demand for the Kofta and falafel dishes, he produced a frozen versions of these and distributed it to supermarkets to make it easy for everyone to have a taste of Haval Grill. 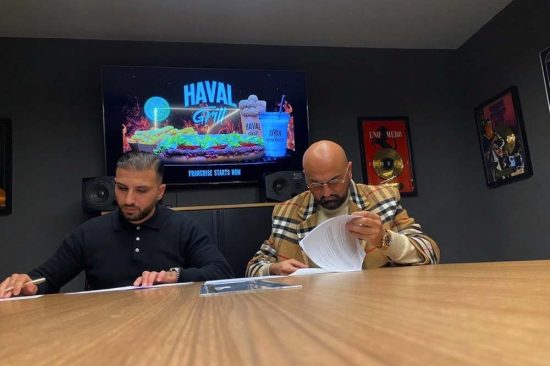 Haval Grill has been open in July 2020 in Bonn, Germany. The restaurant serves Germany’s most famous kebab sandwich with fresh Ayran. The restaurant gained a great popularity during this short period, so another branch was open in Essen. Because of the huge demand for meals, frozen kofta skewers were produce for sale in the markets so that fans of the restaurant could buy them. Today, Haval Grill opens its first branch in Dubai, to be the first branch in the Middle East, North Africa and South Asia.

Xatar was born Giwar Hajabi in 1981 in the village of Kūh-e Qalā‘ (Kurdish:Qalue). He came as a refugee from Iran to Bonn when he was a child. He grew up in the Brüser Berg district and was a member of the street gang Brüser Berger Assis.Under pressure from his father, Xatar learned to play the piano at the age of nine. In 1993, he came into contact with hip hop for the first time when he heard Dr. Dre’s album, The Chronic. He began rapping with his subsequent label mates Samy and Ssio. In 2008, he founded the label Alles oder nix Records which includes the rappers Samy and Ssio and the producers Maestro and DJ. His artistic success continued, until 2020, when he decided to establish a private project, so he opened the “Haval Grill” restaurant in Bonn, Germany and is now working to expand his chain of restaurant to all over the world.