When the Reverso was born in 1931, the feminine appeal of its elegant Art Deco lines became immediately apparent and new versions of the design were soon created, especially for women. Over the decades since then, Jaeger-LeCoultre has continued to explore the Reverso’s feminine side, uniting the codes of fine watchmaking with the decorative crafts.

As a canvas for artistic expression, the double-sided case of the Reverso is unique in watchmaking, providing an opportunity for the artisans of Jaeger-LeCoultre’s Atelier des Métiers Rares® (Rare Handcrafts™ workshop) to unleash their skills in the decorative arts.

For the Reverso One Cordonnet Jewellery, La Grande Maison unites the talents of its gem-setters with its mastery of watchmaking complications, bringing a new and exuberantly feminine expression of glamour to the Reverso collection.

Jaeger-LeCoultre featured the cordonnet bracelet (the word means ‘fine braid’) on several women’s watches during the 1930s. This simple black cord – the ‘little black dress’ of watch bracelets – epitomised the refined elegance of the Art Deco period, and perhaps never more so than when paired with the Reverso for the first time, in 1933.

For 2021, the Reverso One Cordonnet Jewellery reinterprets this exquisite pairing in radiant style, transforming the simple cord bracelet into a supple braid of gold and diamonds and uniting it with a fully diamond-set Duetto case. 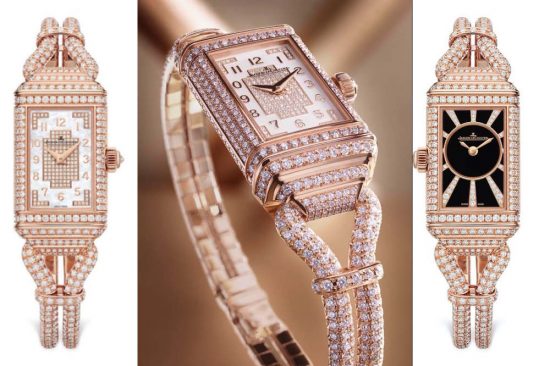 Designed especially for women, the double-sided Duetto offers two dials, each with a different expression of the time. The ingenuity of the movement – the manually-wound Jaeger-LeCoultre Calibre 844 – lies in its ability to turn the hands simultaneously in opposite directions on each dial.

The front dial of the Reverso One Cordonnet Jewellery is constructed of multiple layers: fine golden Arabic numerals are applied to a white mother-of-pearl base and framed by diamond-set brackets; in the centre, framed by a fine filet of gold, a geometric cut-out reveals a glittering field of pavé-set diamonds. The reverse-side dial offers a rich contrast: set onto a background of onyx, diamond-set golden ‘sunbeams’ radiate out from the centre to form the hour markers.

The entire case and bracelet attachment, the bracelet itself and both dials are fully set with diamonds, while the winding crown is adorned with a reverse-set diamond. (1,104 diamonds for a total of 7.84 carats). For the case, Jaeger-LeCoultre chose the grain-setting technique, whereby the diamonds are held in place by beads of gold so tiny that they are almost invisible, keeping the stones very close together, so that the watch case appears to be encrusted in a solid mass of diamonds.

Conceived as an ode to 21st-Century femininity, the new Reverso One Cordonnet Jewellery attests to the horological savoir-faire, artistic craftsmanship and jewellery-making skills of La Grande Maison, while paying homage to the women who inspire Jaeger-LeCoultre every day.

Functions: Hours and minutes (indicating the same time on both dials)

In 1931, Jaeger-LeCoultre launched a timepiece that was destined to become a classic of 20th-century design: the Reverso. Created to withstand the rigours of polo matches, its sleek, Art Deco lines and unique reversible case make it one of the most immediately recognisable watches of all time. Through nine decades the Reverso has continually reinvented itself without ever compromising its identity: it has housed more than 50 different calibres, while its blank metal flip side has become a canvas for creative expression, decorated with enamel, engravings or gemstones. Today, 90 years after the Reverso was born, it continues to epitomise the spirit of modernity that inspired its creation.