Masterpiece Fine Art, Dubai; the fine art dealership from the United Kingdom is honoured to introduce The Abrahamic Family: JOE MACHINE, a captivating collection of contemporary paintings from renowned British artist Joe Machine in his Dubai and UAE debut. Exclusively exhibited from the 1st of July until the 14th of August at the newly opened Masterpiece Fine Art, Dubai Gallery Two in Wafi City, these eloquently striking works from the highly coveted artist champion passion, storytelling and regional history, exploring key historical figures within the three Abrahamic faiths – Christianity, Islam and Judaism.

An award-winning artist, illustrator and published writer, Joe Machine has been described as the successor to Francis Bacon and William Blake, having exhibited in some of the most prestigious galleries in the UK and internationally. Combining modernism with postmodernism, Joe Machine is known both for his stripped, pared down style and beautifully symbolic paintings of nature, mythology and religion.

The Abrahamic Family: JOE MACHINE is an homage to history in a contemporary form, bringing famed narratives to life in what was once called ‘history painting’. Revered in the West and often considered the highest, most ambitious form of artistic expression, this new series of painting by Joe Machine challenges conventional perspectives of 20th century art, juxtaposing abstract art with reality or events from history, using references to better known stories that have transcended continents and stood the test of time.

Each narrative is imagined through personages and scenes, set in remote periods of the past, offering the spectator who looks at them the essence of the personages depicted. Legends of folklore and religion are interweaved throughout the collection, uniquely captured with consistent passion and everlasting verve to deliver crisply iconic versions of the subjects and personages portrayed. The Peace Treaty and Saint Guthlac assailed by the demons are principal tributes to Christian tales, while notably The Golden Age of Al-Andalus, and Learning Deuteronomy, Chapter Six reference the regionally recognisable stories and traditions across Islam and Judaism. Pieces from the series like The Pilgrimage of Ibn Battuta, Bede the Venerable (Christian) and Three Wise Men (Judaic) will also be on display for viewers to appreciate at Ibn Battuta Mall in the near future. The style and format of each piece owe their characteristics to several related sources, including medieval book illustrations and to both Persian and Mughal miniature painting. All these modes are particularly well suited to the visual narrative, exploring themes and figures that are beautiful testaments to the homogenous diversity encapsulated under the Abrahamic faiths. 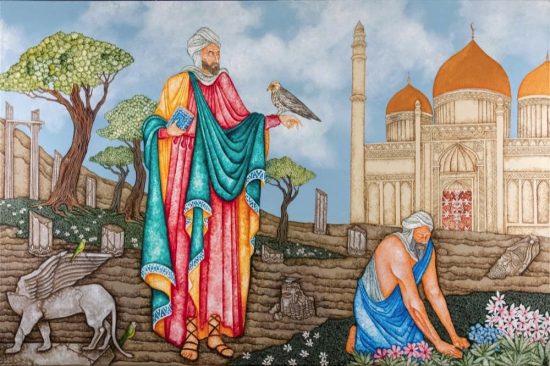 Even though an artist of the modern age, Joe Machine can be thought of, not as an archaising artist, but as a unique artist of his own time. He began creating his unique pieces of art in 1988 following a troubled past, in an effort to visualize a brighter new beginning and become one of the most important British artists of the 21st Century. In 1999 he became a founding member of the Stuckists, the first anti-conceptual Remodernist art movement in the United Kingdom and was awarded with the Real Turner Prize in 2002 and the Grand Prize Winner at the Cork Street Exhibition 2012.

The artist ardently admires the works of Steven O’Brien; an academic, poet, essayist, and novelist who has also lent his words to describe Joe’s artworks to perfection. Encompassing mythography through words and art, these masterminds have collaborated on several projects including their 2017 publication, Britannic Myths. Drawing inspiration from Steven’s writings of the sacred stories, ritual landscapes and totemic historical figures, The Abrahamic Family: JOE MACHINE is a regional debut that speaks to the changing times and ongoing commentary on tolerance and acceptance of religious practice in the UAE. The series comprises re-utterances of figures from the Abrahamic tradition and visually depict ancient tales. The artworks can be described as visual feasts of colour, line and detail that play a universal role in the conversation between cultures, transcending the barriers imposed by differing languages and offering an opportunity to appreciate timelessness in its purest form