DUBAI, 19 November 2021 – A teenager tugged at the heartstrings of racegoers at Expo Run today as she lifted herself out of her running wheelchair towards the end of the race to help a fellow participant over the finish line.

Eighteen-year-old Chloe Fox, who was involved in a near-fatal road accident in 2017, was part of the Team Angel Wolf ‘pack’, a non-profit organisation formed by members of the Dubai-based Watson family, who participate in races and sporting events to raise inclusivity awareness for people of determination and encourage society to embrace healthy living, for the 5km-distance route around the Expo 2020 Dubai site. 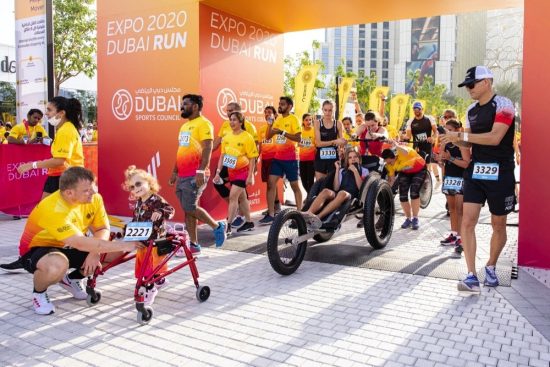 “It was emotional seeing Chloe get out of her chair, which we had been pushing, to help Rio across the finish line – she is a lovely girl, an absolute superstar and very special,” said Nick Watson of Team Angel Wolf. Watson is the father to Rio, who was diagnosed with Q44 Deletion De Novo, meaning he has trouble walking and speaks through sign language. The team’s running ‘pack’ also included Watson’s daughter Tia, wife Delphine and first-time sporting challenge participants, father Marco Bossen and six-year-old daughter Frida.

“We believe that as long as everyone gets to the start line, they can cross the finish line together. Expo 2020 is about bringing people together, and doing things together as a community is really key. Sports is a great way to include us, including Rio, which is extremely important.” 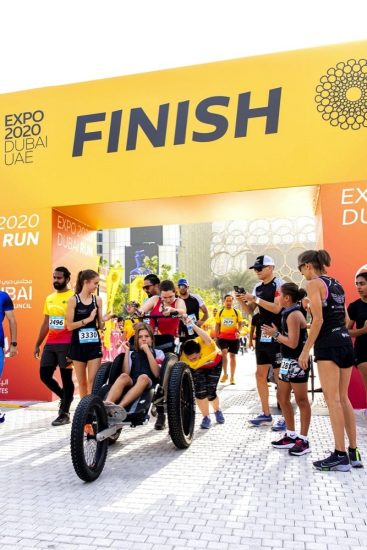 Open to athletes of all ages and abilities, with three distances to choose from (3km, 5km and 10km), all participants to the one-off, sold-out Expo Run received free entry to Expo 2020 Dubai for the rest of the day, as well as a goody bag packed with a commemorative t-shirt, a medal and more.