{:en}Dubai, United Arab Emirates – The “Kickoff” for the realisation of the Floating Storage and Regasification Unit (FSRU) of Liquefied Natural Gas (LNG) in Alexandroupolis by Gastrade SA was formally given in a special ceremony that took place in the old Storage House of the Alexandroupolis Port Customs on Tuesday, May 3, 2022. The Prime Minister of Greece, Kyriakos Mitsotakis, and the Prime Minister of Bulgaria, Kiril Petkov, co-signed the special symbolic plaque for the commencement of the realisation of the project, which will become a new energy gateway, playing a key role not only in the energy security and independence of Greece, but for the entire Southeastern Europe, contributing decisively to the smooth energy transition and energy pluralism of this extremely sensitive region.

The event was also attended and addressed by the President of the European Council, Charles Michel, the President of Serbia, Aleksandar Vučić, the Prime Minister of North Macedonia, Dimitar Kovačevski, the US Ambassador, Geoffrey Pyatt, as well as representatives of the local government, including the Regional Governor of Eastern Macedonia and Thrace, Christos Metios, and the Mayor of Alexandroupolis, Giannis Zampoukis. 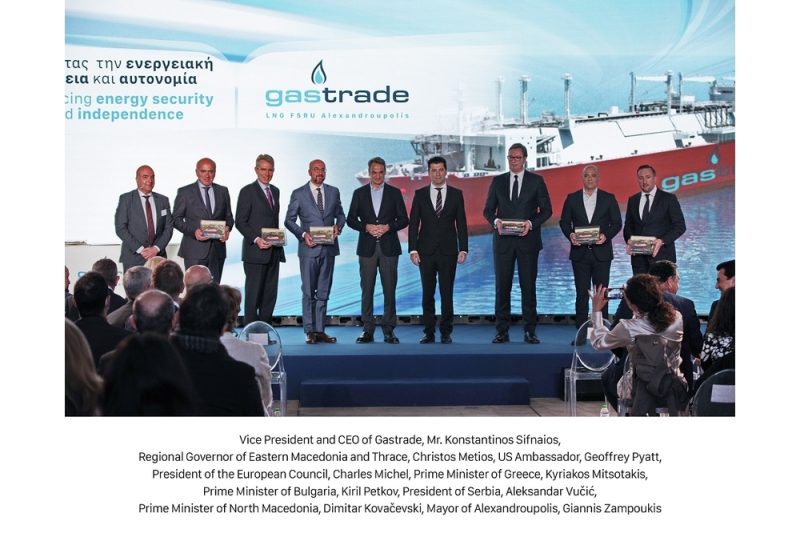 The shareholders of Gastrade SA also participated, namely the Founding Shareholder and Chairwoman of the Board of Directors of Gastrade, Ms. Elmina Copelouzou, the CEO of Gaslog Cyprus Investments Ltd, Mr. Paolo Enoizi, the Chairman of DEPA Commercial, Mr. Ioannis Papadopoulos and the CEO of the company, Mr. Konstantinos Xifaras, the CEO of Bulgartransgaz EAD, Mr. Vladimir Malinov, and the CEO of DESFA, Mrs. Maria Rita Galli.

The construction and operation of the Alexandroupolis FSRU will strengthen the strategic role of Greece as an energy hub for the wider region of Southeastern Europe and will offer alternative sources and gas supply routes to the region, enhancing energy security of supply and energy autonomy, during challenging times. The project will also make Alexandroupolis an energy gateway for the entire region of Southeastern Europe, highlighting the strategic importance of the city and stimulating the local economy and employment.

The FSRU, with a capacity of 153,500 c.m. of LNG, will be connected to the National Natural Gas Transmission System (NNGΤS) of Greece with a 28 km long pipeline, through which the gasified LNG will be transmitted to the markets of Greece, Bulgaria and the wider region (Romania, Serbia, North Macedonia etc.), with the prospect of supplying Ukraine, as well.

The Alexandroupolis FSRU is expected to operate by the end of 2023, with the contracted regasification capacity reaching already up to 60% of its technical capacity of 5.5 billion c.m. per year. It is noted that the Independent Natural Gas System (INGS) of Alexandroupolis is included and financed by the Operational Program of the NSRF “Competitiveness, Entrepreneurship and Innovation 2014-2020” (EPAnEK), with an amount of public spending of 166.7 million Euros.

Gastrade has also submitted to the Regulatory Authority for Energy (RAE) an application for a new Independent Natural Gas System (INGS) License, for the project “Thrace INGS”, which will also consist of a Floating Storage and Regasification Unit (FSRU) and will be developed near the first FSRU at the Sea of Thrace, offshore Alexandroupolis.

The Founding Shareholder and Chairwoman of the Board of Directors of Gastrade, Ms. Elmina Copelouzou noted: “The energy map is changing. We are now entering the final stage of implementation of the FSRU Alexandroupolis, an important and innovative project for Greece. In a period of high volatility in the geopolitical and energy landscape, with this project, Greece shows Europe that it can respond with firm strategic steps to the uncertainty of the times and, through growth, and offer solutions from which everyone can benefit. FSRU Alexandroupolis opens a new energy gateway for Greece and Southeastern Europe, which at a critical moment comes to meet an urgent national and European need. From the acritic city of Alexandroupolis that has embraced this project so much, we make Greece an energy reference point in the region, contributing to energy security and the diversification of supply sources, with benefits for millions of citizens in many different countries”.

The Vice President and CEO of Gastrade, Mr. Konstantinos Sifnaios, stressed that: “The strategic and economic necessity, but also the importance of the project of the LNG Station of Alexandroupolis is more than obvious in the new energy landscape. With this very important project that has brought together the countries living in this neighbourhood of Europe, promoting cooperation, solidarity and ultimately peace in the region, we are strengthening regional energy security, energy liquidity, security and the well-being of citizens throughout the region of SE Europe. We would like to thank our shareholders, who are the cornerstones of overall success, as well as a large network of organizations and people who contributed to the launch of the Alexandroupolis LNG Station and of course the central Government and personally the Prime Minister of the country for the unwavering and substantial support to the project. Alexandroupolis is the gateway and Bulgaria is the connecting link of the supply chain that this project comes to supply, on the way to Serbia and Romania. The second FSRU, which was licensed by RAE last Thursday, allows for the further extension of this chain to Moldova and Ukraine. With these two projects, we are contributing to the creation of a real regional energy hub in the region that will strengthen the economy, security and cooperation”.

From his side, the CEO of Gaslog Cyprus Investments Ltd, Mr. Paolo Enoizi, stated: “Everyone in GasLog is extremely proud for our participation in the Alexandroupolis FSRU project which is kicked-off today here in Alexandroupolis. Τhe tragedy currently unfolding in Ukraine has highlighted the importance of LNG not just as fuel that will enable the transition to a lower emissions world, but also as a critical element of many countries’ energy security plans. Such security is only delivered by a substantial investment in infrastructure, which nowadays comes at a cost and a delivery time that, in comparison, shows the foresight of the Gastrade founders, the Government of Greece and the various shareholders that had been planning for this investment well in advance. GasLog as a leading LNG shipping provider has contributed to the overall FSRU specification, its design and eventually its construction and will deliver the physical FSRU at Alexandroupolis anchorage by the end of 2023. GasLog‘s experienced teams onboard and ashore will manage safe and reliable operations of the unit for the years to come”.

The Chairman of DEPA Commercial S.A, Mr. Ioannis Papadopoulos, and the CEO, Mr. Konstantinos Xifaras, jointly stated that: “The Alexandroupolis LNG Terminal, being the largest energy project in Greece in recent years, is a strategic investment that will contribute decisively to the secure supply of natural gas for our country. It enhances Greece’s geopolitical position and role as an energy hub for the Southeastern Mediterranean, since this investment is being implemented at a time when the role of LNG in the natural gas market is already considerably amplified. DEPA Commercial’s involvement in the project, confirms its leading role in οur country, demonstrating in practice that it is the driving force behind energy developments in Greece and Southeastern Europe”.

The CEO of Bulgartransgaz EAD, Mr. Vladimir Malinov, noted: “The importance of the Alexandroupolis Independent Natural Gas System as a new energy gate is key to Southeast Europe. The terminal will provide the necessary additional quantities of natural gas, offering access to producers from around the world and connectivity with the appropriate supply routes to all interested users in the region. The level of booked capacity and the interest of traders and consumers prove both the strategic importance of the terminal and its economic efficiency. Thanks to the terminal, Bulgaria, Greece and neighbouring countries will be able to take full advantage of the growing LNG market and the security and competitive prices it provides. Access to alternative gas supplies, from the US, Qatar, Egypt and other countries, will ensure competitive gas prices for these countries. The implementation of the project will strengthen diversification of natural gas sources and will stimulate competition for the benefit of business and end users, while growing liquidity through access to LNG will accelerate the process of decarbonisation in the energy sector. I am glad that we are working together for the success of the project”.

The CEO of DESFA S.A, Mrs. Maria Rita Galli, stated: “The Alexandroupolis FSRU comes to establish Greece as a country with a leading role in regional energy developments, decisively strengthening, amidst a challenging international landscape, the energy security of Greece and the wider region. The interconnection of this strategically important project with the existing and the new export routes to Bulgaria and North Macedonia, through DESFA’s network, will allow for the increase of the country’s exports to the markets of Southeastern and Central Europe, further establishing Greece as an energy hub. DESFA contributes to this project with its leading expertise and its extensive know how on building and successfully operating a regassification terminal since more than 20years, remaining committed to the development of high value-added energy infrastructure, that strengthen security of supply while enabling the further diversification of supply sources and the energy transition of the country and the wider region”.

GASTRADE S.A. is the first company operating in Greece that has received a license for an Independent Natural Gas System. It designs, develops and operates, infrastructures which are necessary for the reception, transmission and distribution of natural gas as well as for its storage, liquefaction and re-gasification, in a safe, reliable and financially sound manner. Gastrade’s five shareholders are Ms. Elmina Copelouzou, GasLog Cyprus Investments Ltd., DEPA Commercial A.E., the Bulgarian Bulgartransgaz EAD (“BTG”) and DESFA S.A..